“SLOPPY” is NOT- In the Perfusion Dictionary! 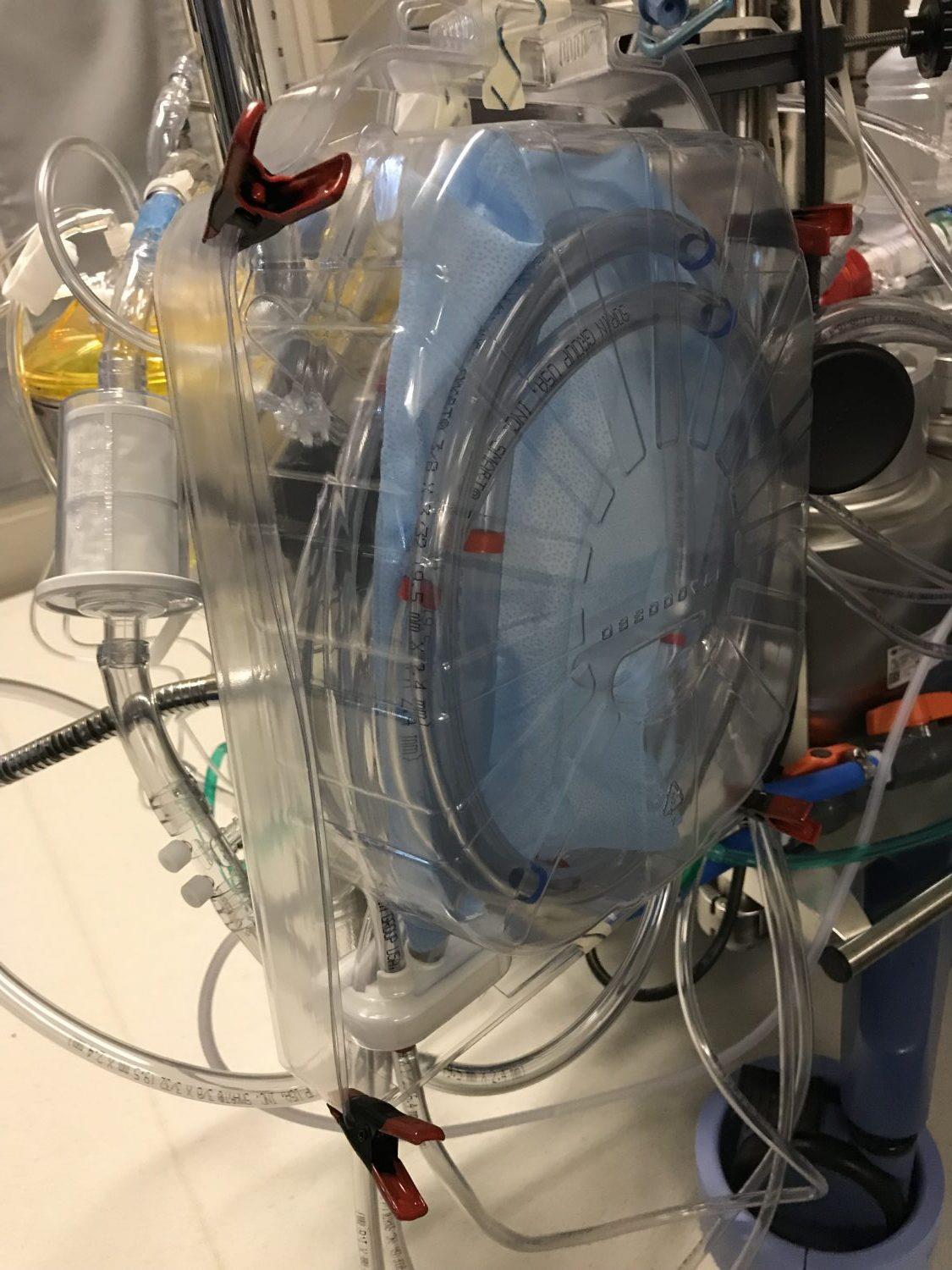 I have huge respect for the manufacturers of our ECC packs and disposables.  Most often, if a pack needs to be customized or changed- they are right on it.  However, over the past few weeks I have been working with this one disposable ECC that has been a huge disappointment in terms of sterility and package integrity.  I won’t name the manufacturer- because that isn’t the point of this article- and I never want to single out or disparage any of the great companies that strive so hard to meeting our demands for safety and clinical excellence 🙂

The problem:  Over the past few weeks I have encountered a disturbing issue that seems to be the result of an obvious design flaw, and for some reason- either has not been reported or noted to the manufacturer- or has just emerged as an issue.  IMO- I really don’t or can’t believe that this issue hasn’t been encountered by any of my peers- chances are- it has, but people have just dealt with it, and not notified the manufacturer of their concerns.

The problem arises from the fact that this table pack was designed for quick release (so to speak) when opening the lid and passing lines off to the sterile field.  Unfortunately, there is no seal between the plastic covers of the pack, and it is mostly dependent on a “press-fit” and two flimsy tapes to hold the pack together.  As you can see, there are foam inserts wrapped around each line, designed to demarcate the sterile barrier edges, and press against reciprocal foam pads at the tubing opening holes.  When looking closely at the pictures below, you will notice huge gaps between the plastic edges, as well as tubing that has obviously slipped out of the pack.  Once the tubing slips out, it obviously cant be pushed back in, not to mention that once the foam pads are disengaged from each other, the seal they formed is now non-existent,  The manufacturer relies on the friction of the press fit- to maintain the seal between the foam pads- once that is gone- the tubing slides in and out of the pack effortlessly- like a straw slipping  in and out of an over sized lid to a soda cup.

Speaking of straws- the straw that broke the camels back here(so to speak), was when almost the entire lengths of sucker tubing, as well as the arterial line- were pulled out so far, that I passed up and extra 1/4″ line and connector- to make sure that the scrub techs had enough tubing to work with.  THAT was totally unacceptable- Period.  I find it incomprehensible that the manufacturer did in good faith- send out a pack with such an obvious design flaw.  It is hard for me to comprehend such a myopic lack of clear vision- on top of which- how has this not been reported before?

I’m not trying to be brutal here- but the contents of the pack, once opened and setup- are at serious risk for a major break in sterile technique. 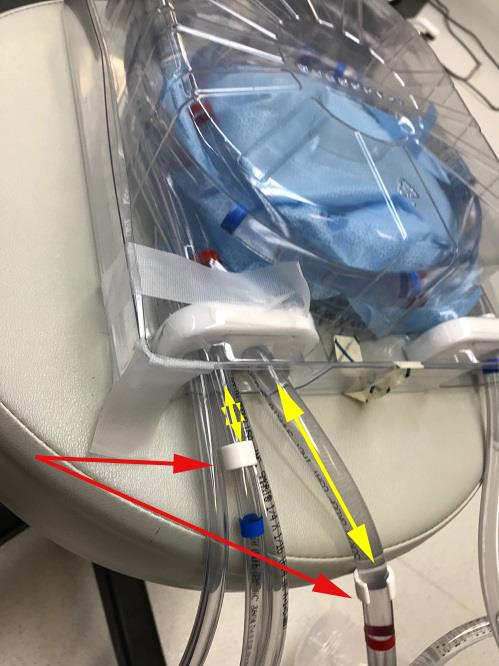 Arrows point to Manufacturers guides that should be flush with the clam shell table pack-  The seal obviously doesn’t work- as the weight of the lines themselves cause them to drop out! 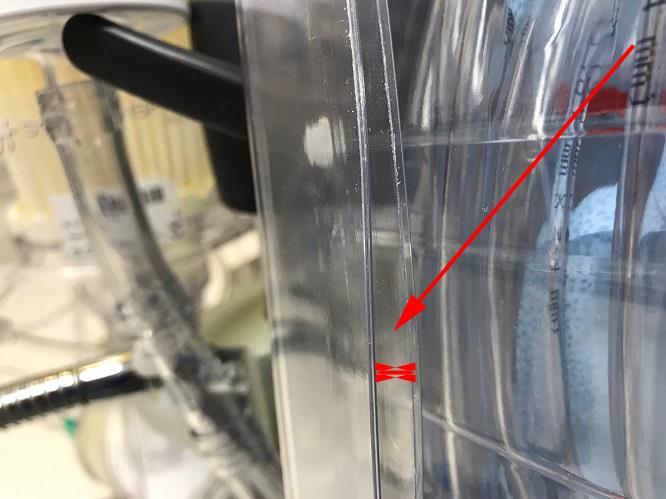 Jerry rigged taping- looks sloppy- IS SLOPPY- and doesn’t really “Seal the Deal’ !  I’m embarrassed to say- the tape job was mine.  I should have slowed down and made it look prettier- but… 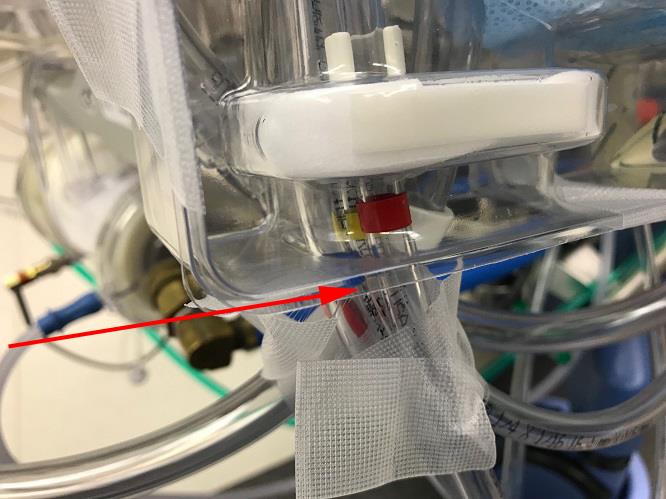 More gaps… I taped the tubing to the pack so it wouldn’t slip out.

These clamps help- but should never have had to be used to begin with!  Note that the entire perimeter of the table pack has visible gaps between the opposing edges.  Clearly these are NOT air tight- let alone sealed to prevent potential fluid or debris entry.  There is a lot of movement and slippage going on with edges of this container, so any assumption that the surface is still sterile an inch or two deeper towards the inside of the pack- well that’s question I cannot definitely answer.

Good luck and be careful 🙂