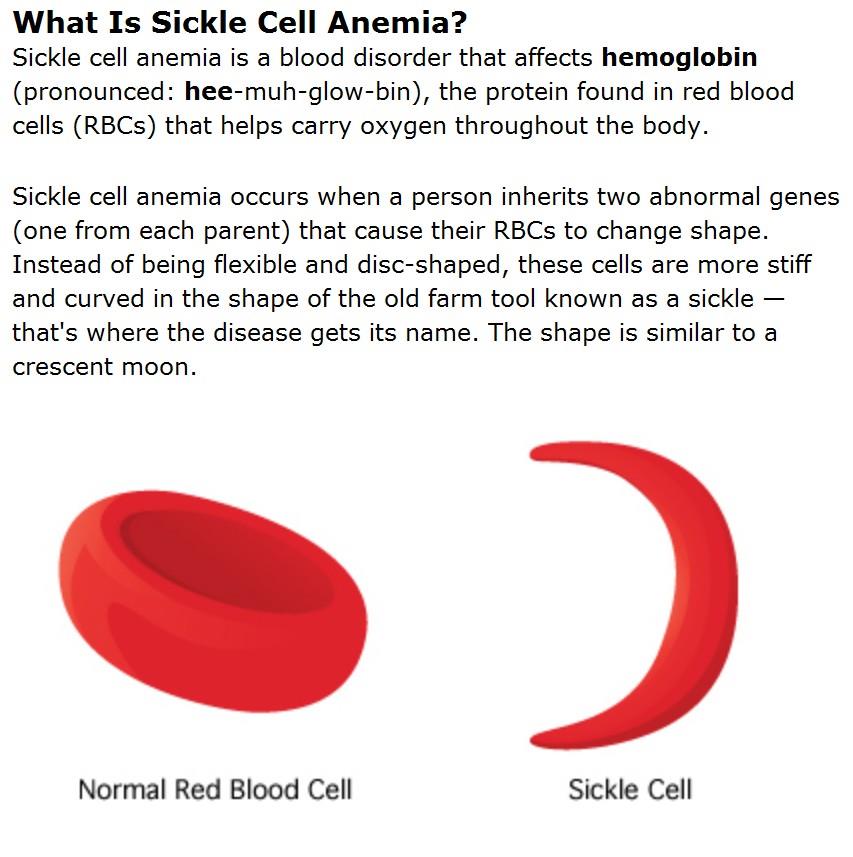 Sickle Cell hemoglobinopathy is a single gene recessive disorder that involves an abnormality of the hemoglobin (Hgb) molecule.  This disorder causes the red cell to sickle under certain circumstances.  A sickled cell cannot undergo normal respiratory functions and they interfere with normal blood circulation.

Sickle cell disease is genetic and a patient may be homozygous (SS) or heterozygous (Ss).  At the genetic level adenine replaces thymine in the codon of chromosome 11.  Ultimately the result is Hgb S that polymerizes, gels and precipitates with exposure to hypoxemic conditions.  The severity of the gene expression varies among individuals. 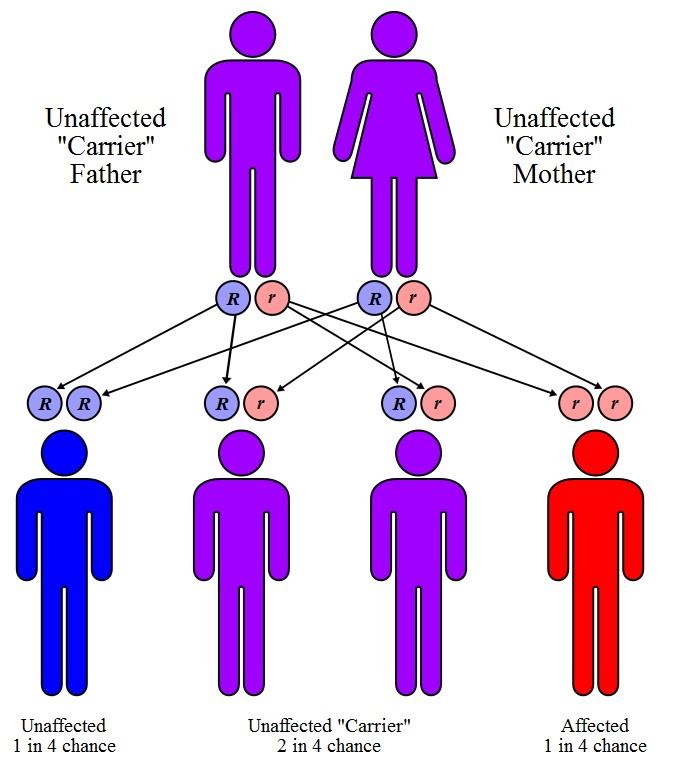 In patients with homozygous (SS) disease, clinical symptoms are apparent.  These include recurrent painful crises, sequestration of sickled cells, chronic hemolytic anemia, systemic diseases, vaso-occlusive diseases, permanent organ damage, recurrent infection, recurrent stroke and early death.  There is no cure for this disease.  SS patients will have these symptoms even without exposure to the stress factors that induce sickling.  Sickling will occur at pO2 less than 40 mmHg and arterial saturation’s less than 85%.

Patients with heterozygous (Ss) disease have the sickling trait in all their red cells, but may not express the symptoms unless the body is stressed.  Sickling may occur in these patients at pO2 less than 20 mmHg and arterial saturation’s below 40%.

Afro-Americans are the highest risk population for having the sickle cell trait with an 8% occurrence.  Therefore all blacks should be tested prior to surgery for this disease.

II.    TREATMENT PRIOR TO CPB:

B.    Partial Exchange blood transfusion–The red cells that are taken off with the pheresis are replaced with donor blood containing normal Hgb-A cells.  The Hgb-S cells are effectively diluted by this process, with the Hgb-S diluted to a target amount of 30%.  This can be calculated by:

A blood containing prime can reduce the Hgb-S further.

A.    Pheresis and Partial Exchange Transfusion:

1.     Both the pheresis and the partial exchange transfusion are done in the operating room pre-op.

2.     All of the routine open heart monitoring equipment is used.  A 9F internal jugular catheter will be used to withdraw the blood for the pheresis.  The replacement  fluids can be given through a peripheral IV.

4.     Have a high flow fluid warmer and infusion system ready.

5.     Autotransfusion machine that can do plasmapheresis must be available and ready to use.

6.     The pheresis and blood transfusions are done after induction of anesthesia but before surgical incision.

7.     Blood is withdrawn initially at a rate of 100 ml/min directly into the cell saver bowl.  The blood must be anticoagulated as it is being withdrawn from the internal jugular vein through the 9F catheter.  Later the blood can be withdrawn slower (50 ml/min).

8.     Donor packed red blood cells and 5% albumin can be infused as indicated by the mean arterial pressure or by a decline in the mixed venous O2 to 60%.

9.     Some of the platelet poor plasma can be reinfused to maintain volume.  The platelet rich plasma should be saved to be given after bypass.

10.    The following may be seen:  Increase in heart rate.  A decrease in blood pressure, pulmonary artery pressure, central venous pressure, cardiac output and mixed venous O2.  If the patient becomes unstable the pheresis/exchange must be discontinued.

11.    Upon commencing cardiopulmonary bypass, up to two additional liters of blood may be withdrawn from the venous side and processed.  Normal donor blood may then be added to the circuit to maintain hematocrit.  Sodium bicarbonate may be needed to maintain the pH.

13.    The following conditions induce sickling of the red cells and should be avoided:  Hypoxia (arterial or venous), acidosis, hyperosmolarity, hypothermia (vascular stasis due to hypothermia may induce sickling), or other factor which would shift the oxy-hemoglobin dissociation curve to the right.

A.      Partial Exchange Transfusion– Pre-Op the day before or through a venous return line.  This should be plasma sequestrated to save the plasma.

E.      Hypothermia should be minimized– not below 30°C  (to prevent capillary stasis and vasoconstriction).

F.      Prime– Blood may be used (but less than 3 days old) hemodilute to decrease blood viscosity.

I.    Abundant and repeated perfusion of coronary circulation.

1.    Exchange transfusion on CPB is the treatment of choice for patients with homozygous sickle cell disease.  This treatment removes the offending hemoglobin, and also treats the anemic form of the disease in which low hemoglobin levels possibly will provide inadequate oxygen-carrying capacity on bypass.

3.    The standard venous reservoir and cardiotomy should be prepared in advance of the exchange transfusion and should contain enough volume to exchange transfuse the blood volume 1.5 times.

5.    As the volume is drained into the secondary reservoir, an equal amount of volume should be reinfused through the arterial line.

6.    Once a minimum of 1 patient blood volume is removed, the secondary reservoir may be clamped off and the primary venous reservoir opened to initiate full CPB.

7.    From this point on, CPB should continue as is usual for the average patient, with the addition of centrifugation-processing of the exsanguinated blood to remove the sickled cells and retain the plasma components for post-pump reinfusion.

8.    Exchange transfusion eliminates the causative factor for safer and simpler cardiopulmonary bypass by removing nearly all of the sickled hemoglobin thus allowing for routine patient care.

9.    Some groups recommend washout of the hemoglobin S cells from the myocardium with warm hemoglobin A blood or crystalloid solution preceding the infusion of cold cardioplegic solutions.

10.    Prior to weaning from CPB, a  full set of laboratory values should be obtained.  These should include the following as a minimum:

11.    Be sure ionized calcium, magnesium, potassium, and pH are corrected to normal prior to termination of CPB.

12.    Additional blood products including platelets should be on hand to aid in the control of any coagulopathy which remains post CPB.