Renee is a colleague I work with quite often.  She is an amazing perfusionist as well as administrator, mom, and just a decent all around human being. She has a pretty scathing wit- so beware.

She offered to share a policy on the administration of CUSTODIAL THK Cardioplegia.  This is a collaborative effort as I have added some other valuable background information- garnered from other articles on this topic 🙂

So I welcome you to read it and share it.  It is well written, and hopefully we shall add Renee to our editorial staff.

Myocardial protection and preservation is a primary goal for open-heart surgery patients.  To ensure that the patient’s heart is protected during ischemic arrest, the Perfusionist is responsible for the delivery of the cardioplegia solution.  Custodiol HTK (Histidine-Trytophan-Ketoglutarate) is a crystalloid cardioplegia, an understanding of its function and delivery is essential.

Cardioplegia solution is the means by which the ischemic myocardium is protected from cell death. This is achieved by reducing myocardial metabolism through a reduction in cardiac work load and by the use of hypothermia. 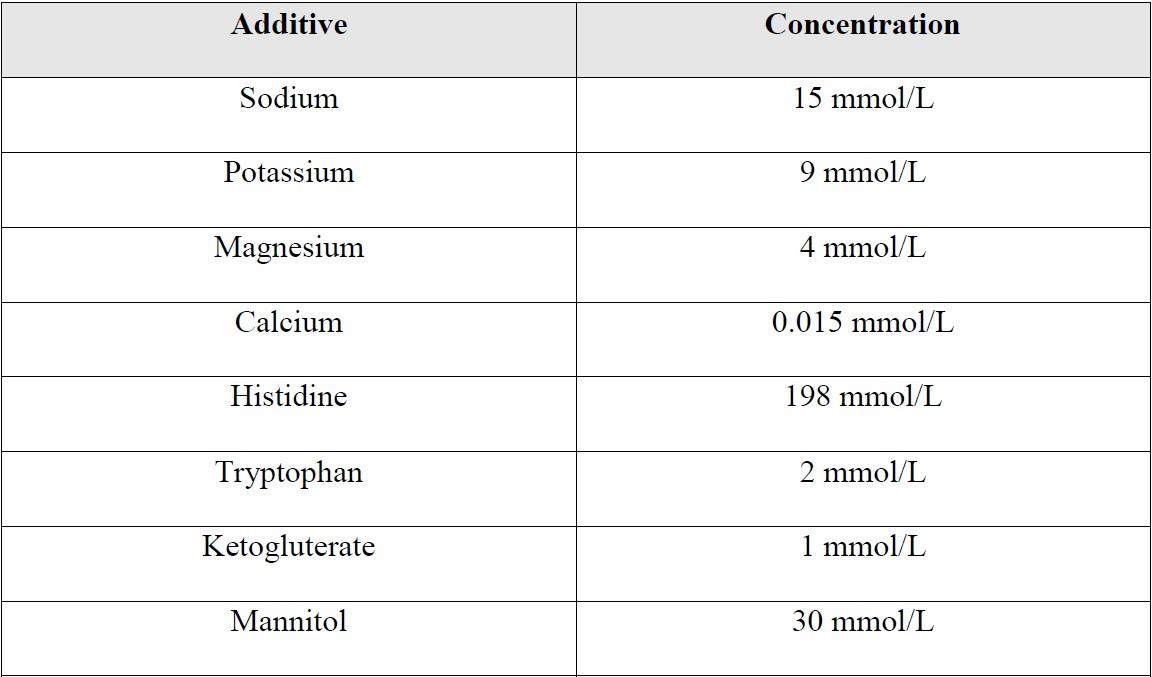 Most cardioplegia solutions can be classified as either depolarizing or hyperpolarizing solutions.  The most common method of myocardial protection during cardiac surgery is depolarized diastolic arrest with a hyperkalemic infusion.  During administration, myocardial cells depolarize, allowing sodium channels to open and sodium to flow into the cell like a normal action potential.  But, because of the elevated extracellular potassium concentration, sodium channels are locked in an inactive state, preventing the cells from repolarizing and keeping them in an unexcitable state.

Depolarizing solutions have been used since the 1970s and are currently considered to be the gold standard of myocardial protection.  These solutions tend to contain between 10-25 mEq/L of potassium which, when administered via an aortic root injection, raises cell membrane potential to approximately -50 mV from a resting membrane potential of -90 mV.  Diastolic arrest occurs at – 50 mV because fast sodium channels, which have a threshold potential between -65 to -70 mV, are inactivated at this potential.  The Nernst potential for sodium-calcium exchangers is also -50 mV, meaning at a diastolic arrest of -50 mV, no net movement of calcium or sodium ions should occur across the cell membrane.

Hyperpolarizing solutions are used as an alternative to hyperkalemic solutions and work by making the membrane potential more negative than resting potential.  This is achieved by using solutions with no calcium and low sodium to induce an arrest. They also add procaine, a sodium-channel blocker, to prevent action potential propagation

Transmembrane ion gradients are maintained closer to normal physiologic levels by utilizing a hyperpolarizing arrest as opposed to hyperkalemic depolarized arrest.  This approach has the theoretical benefit of reducing the severity of ionic imbalance during the ischemic period.  Additionally, few ion channels and pumps are active and the metabolic demand of the myocardium is greatly reduced.  The potential for influxes and overload of sodium and calcium during hyperpolarized arrest is reduced because at hyperpolarized membrane potentials, sodium and calcium channels are closed.

These channels have threshold potentials near -40 mV, which is close to predicted membrane potentials of cells exposed to depolarizing cardioplegia solutions.  Rising intracellular calcium is a concern because it is associated with irreversible muscle contracture and myocyte necrosis.  Additionally, placing cells in a prolonged depolarized state increases the consumption of high-energy phosphate stores when compared to hyperpolarizing solutions.  Based on these concerns, some surgical teams prefer the use of hyperpolarizing solutions.

While cardioplegia solutions can be grouped into two general groups, additional differences exist in the additives used in each solution.  Each additive used serves a specific purpose: ion channel blockers, buffer pH, and so on.  A general understanding of some common cardioplegia additives is beneficial when choosing which solution to use.  While formulations and techniques vary, the goals of each solution are the same: to lower cell metabolism, to achieve electrical and mechanical quiescence, and to reduce the impact of prolonged ischemia.

Cardioplegia consists of three major components: an arresting agent, hypothermia, and additional protective agents in the form of additives. Formulations vary between solutions and surgical preference. Some common additive agents are outlined below

Adenosine is used in depolarizing agents to enhance cardiac arrest. When compared to hyperkalemic solutions alone, a combination of adenosine and hyperkalemia reduces the time to induce cardiac arrest. This is thought to be associated with transient hyperpolarization caused by adenosine prior to the hyperkalemic-induced depolarization. Electrical arrest of the SA node conduction prior to mechanical quiescence produces a more rapid global arrest.

During hyperkalemic depolarized arrest, high extracellular potassium causes fast sodium-channels to be inactivated. Over time a sodium window current can allow calcium to enter the cell, leading to intracellular calcium accumulation and eventual cellular damage. Keeping sodium-channels in an inactivated state keeps the cell membrane depolarized, reducing sodium window currents, and preventing intracellular calcium buildup. Sodium-channel blockers, such as lidocaine or procaine, have been added to some cardioplegia solutions

One of the attractive qualities of HTK is its claim to offer adequate myocardial protection for a 3-hour period with a single dose, allowing the surgeon to complete complex repairs without the need to stop or slow down for additional doses. HTK is classified as an intracellular solution because it contains low sodium and calcium concentrations. When administered, it causes extracellular sodium washout, hyperpolarizes the cell membrane, and induces diastolic arrest.

The major advantage of HTK over conventional cardioplegia solutions is its immense buffering capacity because of the high content of histidine. Histidine is an amino acid which acts as the body’s main intracellular buffer and promotes conditions optimal for hypothermic glycolysis to occur.