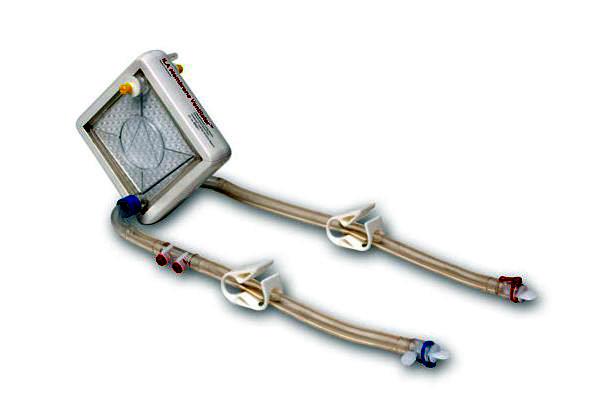 We have a 10 kg patient with pHTN that our team is interested in using the Novalung device to treat worsening RV function and chronic poor lung function.

I am looking for any information regarding useage of this device, specifically: cannulation sites, duration of use, and any issues/complications that have occured.

Feel free to email me privately at freyt@email.chop.edu and thank you in advance for your help.

The Children’s Hospital of Philadelphia

The Novalung Interventional Lung Assist (iLA) device is a membrane ventilator that allows for oxygen and carbon dioxide gas exchange to occur by simple diffusion. It has been used in patients with severe acute lung failure due to ARDS, inhalation injury, severe pneumonia, chest injury, foreign body aspiration, and after thoracic surgical interventions [1]. The concept of “protective ventilation” was described decades ago, but with the introduction of extracorporeal ventilation devices such as the Novalung it may reach new dimensions [2]. It potentially helps to avoid or reduce ventilator associated lung injury and remote secondary organ failure, which is related to injurious mechanical ventilation [3, 4].

Technical aspects of the equipment

The iLA consists of a plastic gas exchange module with diffusion membranes made from polymethylpentene (PMP). These PMP fibers are woven into a complex configuration of hollow fibers. The PMP material is woven to bundles in a low resistance configuration mat arranged in well defined stacks, which provides maximum blood/gas mixing. Gas transfer takes place without the direct contact with blood. In addition, the PMP membrane surface in contact with blood is treated with a heparin coating to provide a biocompatible and non-thrombogenic surface. Blood flows over the exterior surface of the device’s fibers; the ventilating gas (commonly O2) flows inside these fibers (Figure 1). In this way the Novalung iLA mimics the native lung. This allows for the blood exiting the device to have the normal amount of oxygen and carbon dioxide that exits the normal lung. In the arterio-venous portion of this pumpless shunt carbon dioxide exchange is the primary function due to arterial inflow blood, while a veno-venous attachment, which requires the support of a mechanical pump, additionally allows full oxygenation support [5].

The Novalung iLA is a low gradient device, designed to operate without the help of a mechanical pump in an arterio-venous configuration. Based on this principle, adequate mean arterial blood pressure is mandatory. This device is attached to the systemic circulation (preferred access sites are the femoral vessels by percutaneous cannulation using Seldinger’s technique) and receives only part of the cardiac output (1-2 L/min) for extracorporeal gas exchange (Figure 2). This allows complete CO2 removal, which can be controlled by varying the rate of gas flow. Oxygenation, however, depends on the degree of shunt, arterial oxygenation saturation, and other variables. The native lung in this situation also contributes to oxygenation. The limited increase in oxygenation provided by the Novalung might potentially be life saving in some patients with oxygenation deficiency. However, it has to be underscored that patients with a primary oxygenation disorder may not necessarily benefit from the pumpless iLA mode.

As Figure 3demonstrates, the blood enters the device through the inlet connector [1]. The blood flows into the pre-chamber. Any micro air bubbles that may have entered the device are removed through the de-airing ports [3]. The blood flows into the main chamber where gas exchange takes place. The oxygenated and decarboxylated blood is returned to the patient via the device outlet connector [2].  Two de-airing membranes [3] are integrated at the top apex on both sides of the device. These de-airing membranes allow gas bubbles, but not liquids (such as blood), to cross. The de-airing membranes facilitate priming and de-airing of the device, and are also used to eliminate any air trapped in the device during support. An oxygen supply is connected to the upper gas connector [4] and provides the medium for respiration to take place. The lower gas connector [5] is open to the atmosphere in all instances and is the place where gas is exhausted from the device. Table 1 summarizes important technical details of the Novalung iLA.Clinical use and results

The Novalung has been used in over 1200 patients in Europe to enable advanced protective ventilation (1). We have recently reported on the successful use of the Novalung iLA as a bridge to lung transplantation in patients with severe ventilation-refractory respiratory acidosis and hypercapnea (6). The use of the device allows for a safer form of ventilation (‘protective ventilation’), because the patients’ carbon dioxide levels and pH can be adjusted to normal levels with the device. Extracorporeal life support with the Novalung iLA has been applied up to 32 days at the Hannover Thoracic Transplant and Cardiac Assist Program. The Novalung treatment of this particular patient, who was bridged to lung transplantation due to severe post-chemical aspiration lung injury, was discontinued because a suitable set of donor lung grafts became available. The device showed normal function at the time of discontinuation.

Patients who require this form of extracorporeal gas exchange support can suffer from many different respiratory diseases that are associated with hypoxia (low oxygenation or lack of adequate oxygenation across the patient’s native lungs), or hypercapnea (excessive levels of carbon dioxide in the blood that cannot be removed with normal respiration). The cause and nature of the underlying disease state will dictate the site(s) in which blood is diverted from the body to the Novalung iLA. Several options exist, which include diverting the blood from an artery through the device and back into a large vein. As mentioned above, this form does not require a blood pump to move the blood. The driving force for this mode is the left ventricular output. In other situations, which include low cardiac output or hypoxic lung failure, a blood pump is required to divert a relatively larger amount of blood from the venous system through the Novalung, which can be returned into the systemic arterial circulation (veno-arterial mode) or the central veins (veno-venous mode), respectively. The optimal extracorporeal circuit design and configuration for circulatory support is determined by the underlying disease state and the treating physician’s choice.