Please consider the fact that I am NOT a pediatric perfusionist, so this article may be too rudimentary for you Peds guys out there 🙂

Nevertheless- this post began as an elaboration on Z-buffering during CPB- but I ran across this article and thought it was cogent and had some basic concepts covered very well.

The Z-Buffering post will come later (as I use this a lot in my practice), so until then- please read and enjoy 🙂  Of course- if there is someone out there that would like to contribute THEIR insight as to Z-Buffering, plz contact me at ecclog@gmail.com and I will be glad to put it up on ‘Surfers.

The use of cardiopulmonary bypass (CPB) provokes the inflammatory responses associated with ischemic/reperfusion injury, hemodilution and other agents. Exposure of blood cells to the bypass circuit surface starts a systemic inflammatory reaction that may causes post-CPB organ dysfunction, particularly in lungs, heart and brain.

We investigated in the MEDLINE, PUBMED, and EMBASE databases and Google scholar for every available article in peer reviewed journals between 1987 and 2013, for related subjects to CPB with conventional or modified ultrafiltration (MUF) in pediatrics cardiac surgery patients.

MUF following separation from extracorporeal circulation (ECC) provides well known advantages in children with improvements in the hemodynamic, pulmonary, coagulation and other organs functions. Decrease in blood transfusion, reduction of total body water, and blood loss after surgery, are additional benefits of MUF.

Consequently, MUF has been associated with attenuation of morbidity after pediatric cardiac surgery. In this review, we tried to evaluate the current evidence about MUF on the organ performance and its effect on post-CPB morbidity in pediatric patients.

Naik and colleagues applied this technique at the Hospital of Pediatrics in London more than 20 years ago. In this method, the arterial line is connected to the inlet of the ultrafilter and the venous line is connected to the outlet of the ultrafilter in the CPB circuit. The inlet of the filter was clamped throughout the CPB (8). As the patient is separated from the CPB, the clamp is removed from the inlet of the filter, allowing the blood to flow through the arterial line to the filter (10-15 mL/kg/min), and finally from the cardioplegic cannula, as a venous line returns to the right atrium (Figure 1) (13). The filter allows passage of molecules smaller than molecular weight of 65,000 D. When it is needed to maintain the intravascular volume and stabilize the hemodynamics, the blood returns back by the venous reservoir and the venous cannula to the right atrium. This technique was performed until the hematocrit achieved the target of 35% (14). 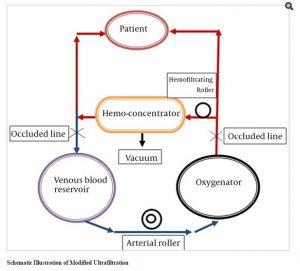 The use of CPB in cardiac surgery is a nonphysiologic situation, leading to unfavorable alterations such as hemodynamics changes (27). In the CPB circuit, contact of blood with foreign materials of the tubing surface, activates the leukocytes and leads to release of a range of cytotoxic factors. These factors include proteases, lysosomal hydrolases, arachidonic acid, and some agents that increase the vessels permeability (29). Throughout CPB, controlled hypothermic cardiac arrest may influence the transmembrane fluid transfer due to hypothermia and increase the myocardial interstitial fluid. In addition, ischemia predisposes the heart to pathologic fluid accumulation after return of coronary blood flow (30). Numerous products of cardiovascular activity such as endothelin-1 (ET-1) elevate after CPB (31). Numerous investigations have shown significant improvements of hemodynamic variables after MUF (Table 2) (17, 27, 32–35). These studies have shown improvements in hemodynamic parameters after MUF, including heart rate, systolic and diastolic blood pressure, right and left atrial pressures, pulmonary arterial pressure, and cardiac function. Systemic vascular resistance did not change after MUF, and a remarkable decrease was observed in pulmonary vascular resistance. Hematocrit was increased 25% to 30% after MUF and reduction of ejection fraction was obviously fewer throughout MUF (32–35). Hodges et al. demonstrated that MUF made no change in the depth of anesthesia, because plasma levels of fentanyl remained in the therapeutic range (34). Davies and colleagues showed hemodynamic parameters improvements and decrease in myocardial edema (36). The study of Gaynor and colleagues demonstrated improvement in the left ventricular function that led to reduced need for inotropes in the early postoperative period (37).

The Effect of MUF on Pulmonary Function

CPB can lead to various degrees of pulmonary injury in most of pediatric patients with severe pulmonary arterial hypertension. Pulmonary dysfunction was marked by reduced pulmonary compliance, increased pulmonary vascular resistance, and also reduced gas exchange (31). Severe acute pulmonary involvement can occasionally lead to fatality (38, 39). CPB hemodilution decreases serum levels of albumin and colloid osmotic force, and augments the efficiency of capillary filtration force. These changes may lead to increase of plasma fluid in the interstitial space, which will reduce the lung compliance and damage the gas exchange through the respiratory membrane. Following aortic cross-clamp, lungs will be ischemic and give off metabolic products to the interstitial liquid. Once the declamping of aorta and the oxygenated blood flow in the lungs creates oxygen free radicals and toxic agent, ischemic-reperfusion injury of the lungs occur. In addition, contact of blood to the CPB circuit as well as hypothermia and hemodynamic fluctuations, promote the discharge of inflammatory factors, leading to an extensive inflammatory reaction causing additional lung injury (38, 40). Several methods have been used to handle the overloaded tissue fluid. Conventional ultrafiltration in CPB (CUF) has been used, which was effective in reducing the water retention after the surgery. Naik et al. descripted that MUF was superior to CUF principally in its capability to decrease the fluid retention related to CPB in pediatrics (35). Numerous trials have shown that MUF may reduce the pulmonary dysfunction in pediatrics populations (Table 3) (18, 19, 41–44).

On the other hand, results of different studies demonstrated that the use of MUF in the post-CPB period in pediatrics patients can improve the pulmonary compliance and gas exchange, which may successfully reduce the pulmonary dysfunction after the pediatric cardiac surgery. MUF may lead to decreased period of tracheal intubation and mechanical ventilation, ICU stay, and total hospitalization after the surgery (40–44).

The Effect of MUF on Total Body Water

CPB in pediatric cardiac surgery exposes children to severe hypothermia, hemodilution and contact of blood to surface bypass circuit, initiating a systemic inflammatory reaction (45). Total body water (TBW) increases as a result of capillary permeability which often leads to tissue edema and is followed by multiple organ dysfunctions, principally in lungs, heart and brain (8). TBW usually expands 11% to 18% in the post-CPB period (8). Causes of TBW increase include hemodilution, hypothermia, young age and long duration of CPB (46, 47). Some methods have been used to reduce tissue edema and hemodilution after CPB, including ultrafiltration through CPB or conventional ultrafiltration, peritoneal dialysis after the surgery, forceful use of diuretics, and MUF (45, 47). The significantly positive result of MUF is reducing TBW after bypass. Reduction in TBW resulted in the elevation of hematocrit to pre-CPB levels and explained better organ function and reduction in postoperative morbidity (48, 49).

The Effect of MUF on Coagulation and Blood Transfusion Requirements

Post-CPB coagulopathy is a well-known complication (50–52). Some studies described that MUF considerably decreased the CPB-related coagulopathy in children undergoing congenital heart surgery (53–55). Ootaki et al. studied seven infants undergoing pediatric cardiac surgery (54). They explained that MUF was associated with considerable rises in platelet count, hematocrit, total albumin and plasma protein. Furthermore, prothrombin, factor VII and fibrinogen levels elevated considerably by MUF (55,56). In addition, increase in hematocrit is a reliable effect of MUF. Bleeding and need for transfusion in the postoperative period have multiple factors including hemodilution, fibrinolysis disorder, and platelet activation (11, 56). Several strategies have modified the hemostatic changes after CPB. MUF improved the hemostasis in the post-CPB period with useful effects on the blood loss, chest tube drainage, and blood transfusion requirements after the surgery. Need for blood products including red blood cells, fresh frozen plasma, cryoprecipitates and platelets were considerably lesser in MUF patients compared with the control group of infants (5, 53, 57).

MUF considerably decreased the necessity for blood transfusion in both deep and moderate hypothermia patients (5, 54, 58). MUF has been demonstrated as a reliable and valuable method for haemoconcentration with positive impacts on reducing the blood loss and transfusion requirements after cardiac surgery (8, 59,60).

Complications of MUF were lung air emboli, dysrhythmia, hypothermia, persistent systemic hypotension, and neurological deficits. These were avoided with application of safety strategy for MUF (61, 62). These strategies included continuous arterial line pressure monitoring, use of bypass arterial line filter, application of a bubble trap in the MUF circuit, hemoconcentrator inversion, changing the position of the bubble detector, warming before haemoconcentration, and use of a heat exchanger in the MUF circuit. It was necessary to apply a warm blood for transfusion line in the MUF circuit, regulate the operating room temperature to be adequately warm, consider a positive pressure servo-regulated MUF, apply an ultrasound flow-meter, assign an in-a-row hematocrit sensor, and use a veno-venous ultrafiltration method (63, 64). Additionally, MUF could change the plasma levels of some drugs, including midazolam, fentanyl, alfentanil, aprotinin and heparin (37, 65).

Use of modified ultrafiltration after separation from CPB can improve the pulmonary compliance and alveolar gas exchange, which may successfully reduce the lung dysfunction after pediatric cardiac surgery. MUF led to decrease of TBW accumulation with improvement in heart and lung function in the post-CPB period in neonates, infants and children. MUF was associated with lower red blood cell transfusion and reduced morbidity. MUF was recognized as a safe and reliable method for haemoconcentration. Use of MUF was not associated with detrimental hemodynamic fluctuation.