Memorial Day is for the Fallen.  And to the soldiers who served and serve to protect our freedom and the integrity of our nation.

God Bless You All. 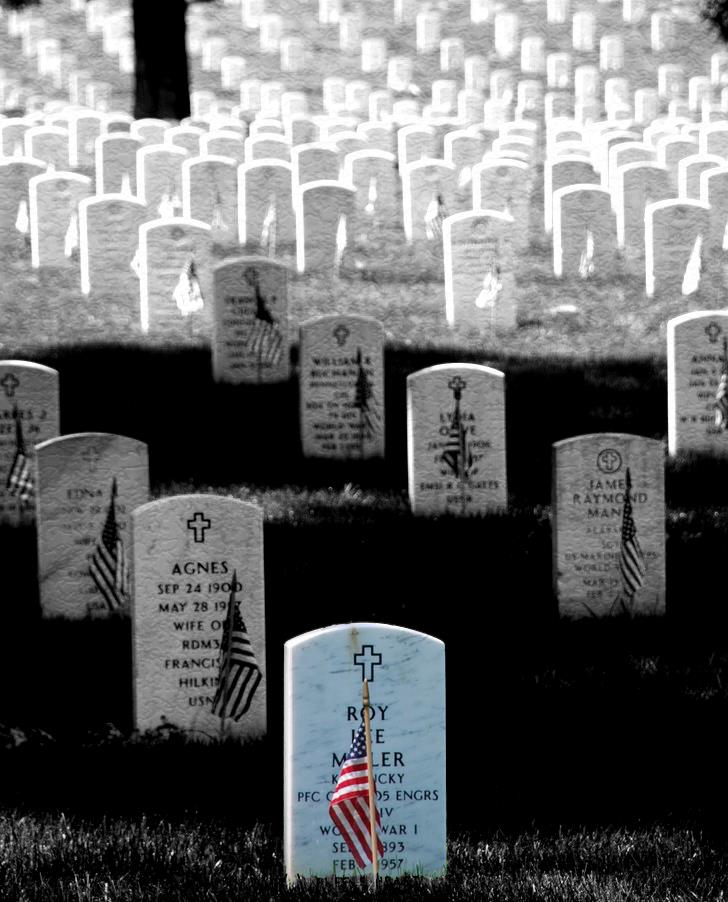 A claim was made in 1906 that the first Civil War soldier’s grave ever decorated was in Warrenton, Virginia on June 3, 1861, implying the first Memorial Day occurred there. There is authentic documentation that women in Savannah, Georgia decorated soldiers’ graves in 1862.

In 1863, the cemetery dedication at Gettysburg, Pennsylvania was a ceremony of commemoration at the graves of dead soldiers. Local historians in Boalsburg, PA, claim that ladies there decorated soldiers’ graves on July 4, 1864. As a result, Boalsburg promotes itself as the birthplace of Memorial Day.

I’m a veteran, and I hate ‘Happy Memorial Day.’ Here’s why.

–
Soldiers of the 3rd U.S. Infantry Regiment, also known as The Old Guard, places flags at grave sites as part of the annual “Flags-In” ceremony in preparation for Memorial Day at Arlington National Cemetery on May 21, 2015. (Jabin Botsford/The Washington Post)
I have friends buried in a small corner of a rolling green field just down the road from the Pentagon. They’re permanently assigned to Section 60. For those of you unfamiliar with the term, it’s 14 acres in the southeast corner of Arlington National Cemetery that serves as a burial ground for many military personnel killed in Iraq and Afghanistan. There are fresh graves there.

[In Arlington’s ‘Old Guard,’ one soldier’s personal connection to valor and tragedy]

Section 60 is a place I visit often.

I toyed with the idea of making the trip south from New York City this weekend to spend some time, reflect and sit quietly but decided against it. Some friend, huh?

Wednesday night, sitting in a pizza joint in the Bronx, watching the world go by, I was upset and couldn’t put my finger on why.

A friend said “Hey! Do you want to go to Fleet Week? It’s this weekend here in the city.”

What? No? Absolutely not. I don’t want to be in the midst of tens of thousands of people clamoring for a chance to look at a static display of Marine Corps and Navy equipment. I don’t want to see Marines and sailors dressed up, paraded around for community relations and recruiting purposes. I don’t want to watch any parades.

As I said it (barked it, really), my friend’s eyes widened and I recognized the frustration in my tone. I didn’t know why I was upset, at first. I paused, and while I was sitting there contemplating my outburst, I heard a commercial on the radio screaming through the tinny speakers.
Wilted flowers and paper name placards indicate recent funerals at Arlington National Cemetery. (Photo by Jennie Haskamp)
“Beaches, beats and BBQs!” it said. “We’re your Memorial Day station with everything you need to kick off the summer in style!”

That’s when it hit me. I’m angry. I’ve come to realize people think Memorial Day is the official start of summer. It’s grilled meat, super-duper discounts, a day (or two) off work, beer, potato salad and porches draped in bunting.
But it shouldn’t be. It’s more than that.

Nearly 150 years ago, Memorial Day— first called Decoration Day— was set aside to decorate the graves of the men who’d recently died in battle. America was still reeling from the Civil War when Gen. John Logan, national commander of the Grand Army of the Republic, issued a proclamation in 1868, according to a PBS account of his decision. “The 30th of May,” he declared, “would be an occasion to honor those who died in the conflict.”

[The twin tragedies of an Army general’s family, laid bare]

He chose the date because it wasn’t the anniversary of any particular battle.

The 30th day of May, 1868, is designated for the purpose of strewing with flowers or otherwise decorating the graves of comrades who died in defense of their country during the late rebellion, and whose bodies now lie in almost every city, village, and hamlet church-yard in the land. In this observance no form of ceremony is prescribed, but posts and comrades will in their own way arrange such fitting services and testimonials of respect as circumstances may permit.

How is it then, some century and a half later, after more than a decade of war in two countries that claimed the lives of some 6,861 Americans, we are collectively more concerned with having a barbecue and going shopping than pausing to appreciate the cost of our freedom to do so?

A friend reminded me that plenty of people use the weekend the way it was designed: to pause and remember the men and women who paid the price of our freedom, and then go on about enjoying those freedoms.
A U.S. soldier walks on a path through the Massachusetts Military Heroes Fund flag garden on Boston Common in Boston on Thursday, ahead of Memorial Day. Each of the approximately 37,000 flags represents a Massachusetts service member who has died. (AP Photo/Michael Dwyer)
But I argue not enough people use it that way. Not enough people pause. Not enough people remember.

I’m frustrated by people all over the country who view the day as anything but a day to remember our WAR DEAD. I hate hearing “Happy Memorial Day.”

I share their names and talk about their lives and their deaths because if we don’t remember, we’ll forget. If we don’t share, they’ll be lost:

I’ve visited their graves at Arlington, in Florida, California, Texas, Louisiana, Tennessee, North Carolina, Utah, Nevada, New Mexico, Colorado, New York, Pennsylvania, Maryland— and I owe a visit to a grave in Maine.
The grave of Marine Gunnery Sgt. Elia Fontecchio at Arlington National Cemetery. (Photo by Jennie Haskamp)
I had the privilege of escorting my friend Gunnery Sgt. Elia Fontecchio home for burial in August 2004. That assignment, escort duty, remains one of the single most honorable things of which I’ve ever been a part. It was certainly the hardest. There’s no script for the moment the flight crew announces you’re escorting precious cargo and should be allowed to leave the plane first. No brief prepares you to meet the tidal wave of grief and anger from parents or a wife or siblings. No PowerPoint slides teach you how to stash your own emotions while you stand firm and comfort the survivors.

So yeah. I’m frustrated by Memorial Day. And I’m angry about apathy.

I want to see people besides the small percentage of us who are veterans, know veterans, love veterans or lost veterans, understand what the day is about. It’s the one day on the American calendar meant to exemplify what it costs to be American and to be free… and we’ve turned it into a day off work, a tent sale and a keg of beer.

[Fallen soldier’s sister grapples with a battle highlighted by the Medal of Honor]
I’m not going to Arlington this weekend. Instead I’ll spend time on the phone with friends whose lives were changed as a result of someone’s personal sacrifice. We’ll talk, laugh, share stories, say their names and we’ll remember. I’ll surround myself with those who lived and we’ll raise a glass in honor of those who died.

I hope you enjoy your weekend — but I hope you pause to remember, too.

Jennie Haskamp is a Marine Corps veteran who continued to work for the Corps as a civilian after leaving active duty in 2006 because her friends were still deploying to Iraq and Afghanistan.