Just a brief primer on Malignant Hyperthermia, should the need ever arise to place a patient on CPB who has been diagnosed with this condition.

It is an unusual co-morbidity and should be approached and treated with an abundance of clinical respect and caution.  Any insight or recommendations from readers would be greatly appreciated, as I have only read some literature on it- but have yet to encounter it.

Having just had a recent CLOSE ENCOUNTER however, it did hammer home one piece of sage advice-  BYPASS YOUR VAPORIZOR- and eliminate all tubing that has come into contact with any anesthetic inhalation agent. 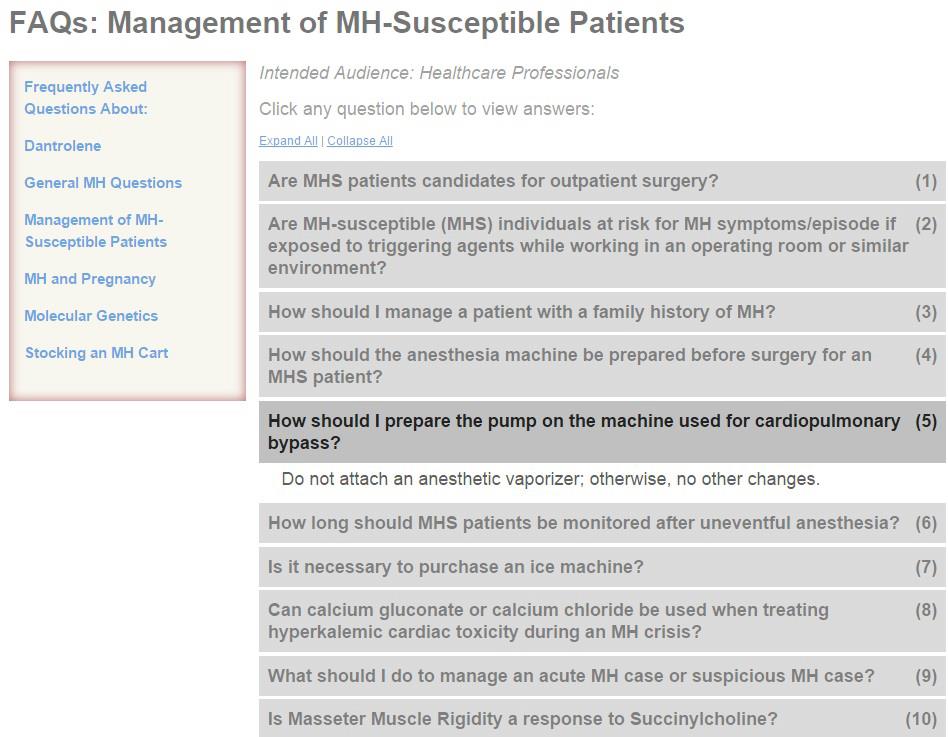 Malignant hyperthermia susceptibility is an important risk factor during general anesthesia. Affected patients have an asymptomatic but potentially lethal hypermetabolic reaction after contact with volatile anesthetics or succinylcholine. Classic symptoms include hemodynamic instability, combined with acidosis, rigor, and hyperthermia. During cardiopulmonary bypass, these signs may be obscured, delaying correct diagnosis and lifesaving treatment. Malignant hyperthermia-susceptible individuals are more sensitive to heat and stress, so rewarming and catecholamine administration may trigger an episode, necessitating prophylactic measures.

In potentially susceptible patients, apart from avoiding classic trigger substances, aggressive rewarming should not be applied. Hemodynamic instability in conjunction with the described symptoms should result in a diagnostic algorithm.

Malignant hyperthermia (MH) is a pharmacogenetic disorder characterized by a fulminant hypermetabolic reaction of skeletal muscle induced by volatile inhalational anesthetics, succinylcholine, and possibly stress and exercise.  Until the advent of dantrolene, the mortality rate was 65% but since the introduction of dantrolene in 1979, it has decreased to between 1 and 10%.

The biochemical changes seen in MH are found only in skeletal muscle and to a small extent in hematologic tissues.  Malignant hyperthermia susceptible (MHS) muscle is similar to normal muscle both histologically and morphologically.  Erythrocyte fragility is increased for an unknown reason, and platelets are thought to be affected by the syndrome in some way.

Resting membrane potential of MHS muscle is normal by contraction will occur at -86 mV whereas normal muscle must be depolarized to -54 mV.  Halothane will depolarize MHS muscle, but not normal, muscle by 5 to 15 mV which is enough to cause a contraction in the MHS muscle.  What causes depolarization and contraction in MHS to progress to contracture and clinical symptoms is not known.

Once the contraction in MHS muscle has been activated it is propagated and maintained by complex cellular processes.  The primary defect in MH is excessive intracellular calcium which is primarily due to increased calcium release and inhibition of reuptake by the sarcoplasmic reticulum.  Mitochondria from MHS muscles also have an increased rate of calcium release when exposed to free fatty acids.  Thus the basic defect of MH may be in either the sarcoplasmic reticulum or the mitochondria.  The resulting increased intracellular Ca++ concentration enables actin and myosin fibers to contract.  Besides activation of contractile elements, this excessive intracellular calcium triggers a chain of metabolic events including:  hydrolysis of ATP, heat production, uncoupling of oxidative phosphorylation, and eventual cell breakdown and release of intracellular contents (CK, K+, Ca++, myoglobin).  When muscle temperature rises above 42.5 degrees C, actin-myosin binding is no longer calcium dependent, and the muscle contraction becomes an irreversible contracture.

Most authorities feel that only skeletal muscle is felt to be involved, not cardiac or smooth muscle.  The changes in the heart on postmortem examination in patients who died from MY are thought to be secondary to the metabolic events during the episode and not to inherent involvement of the muscle itself.

MH crises occur in man, pigs, cattle, greyhounds, racehorses, giraffes, cats, goats, deer, and elk.  MH in humans is felt to be multigenetic with variable expression and incomplete penetrance.  First degree relatives of a MHS individual have markedly increased susceptibility.  Second degree relatives have a lower risk, by their risk is still higher than that of the non-MHS population.  MH also occurs sporadically without a positive family history.  It is not known whether this represents new mutations or previously unidentified pedigrees.

MH is more common in children than adults (52% < 15 years) and in males than females after puberty (males 66%).  It has not been reported over the age of 78 years.  The maximum incidence lies between the ages of 3 and 30 years.  It has been reported in all races.  A previous history of normal anesthesia does not rule out the possibility of a future malignant hyperthermia reaction.

A.    Call for help.  There will be many actions to be carried out in a short time.

B.    Stop all triggering agents immediately.  Continue with safe agents if surgery cannot be stopped immediately.

G.    Cool the patient.  Cold saline, cooling blanket, cool the room, body cavity lavage with cold fluids.  Do not use potassium containing fluids, and eliminate or limit glucose in IV fluids.  Consider CPB/CPS for aggressive and rapid cooling of the patient.

H.    Treat any arrhythmias.  If persistent, procainamide 3 mg/Kg (in adults) to start and begin an infusion if necessary.

K.    Transfer to ICU when stable.

L.    Observe in ICU for 24 to 48 hours.  Monitor for recrudescence and late complications.

M.    Counsel the patient on what happened.

Dantrolene acts at skeletal muscle tissue to inhibit sarcoplasmic reticulum release of calcium producing uncoupling of excitation-contraction in skeletal muscles.  In suspected cases, Dantrolene may be given prophylactically 2.4 mg/kg.