Maximal at 1 minute past atrial delivery:

Primarily plasma- redistributed to endothelial cells- this may account for “heparin rebound”. 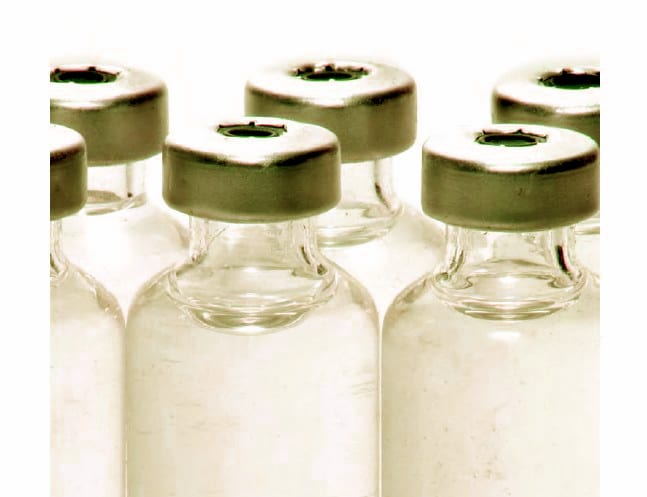 Hemodilution: increase or no change.

Heparin, more specifically described as a glycosaminoglycan, is a polysaccharide that resides almost exclusively in mast cells.  Endogenous heparin plays no significant role in maintaining the fluidity of circulating blood.  Heparan, a related glycosaminoglycan with a substantially lower sulfur content, is loosely attached onto endothelial cell membranes to attract circulating antithrombin III (AT III) and potentiate thrombin inhibition.  Physiologic anticoagulation at the blood-tissue interface results from the activity of heparan, not heparin.  Heparin’s primary physiologic purpose is proposed to be to associated with nonimmunologic defense against bacterial infections with some influence attributed in the processes involving capillary angiogenesis and lipid metabolism (Gravlee, Davis, & Utley, 1993).

Most heparin preparations are described as unfractionated meaning that the heparin compound isolated from animal tissues contains heparin molecules of various lengths with molecular weights ranging from 3,000 to more than 40,000 daltons.  The mean molecular weight approximates 15,000 daltons.  The molecular weight distribution varies with tissue source, and the method of purification.  This variability has clinical relevance because the spectrum of heparin’s clinical actions derives in part from the molecular weight distribution of a heparin compound.  This implies that each commercial heparin preparation represents a family of drugs whose actions and potency may vary from manufacturer to manufacturer and from batch to batch (Gravlee, Davis, & Utley, (1993).

Heparin is distinguished from other polysaccharides by its acid nature.  It is the strongest macromolecular acid in the body, a characteristic associated with abundant sulfation of its saccharide units.  The basic subunit consists of a repeating disaccharide that contains a uronic acid residue linked to a glucosamine residue.  Both the uronic acid and glucosamine residues can assume many different forms based upon the side groups attached to these hexose units.  Sulfate groups may attach to the hexose ring via an oxygen, amino, aminoacetyl, or methane link.  The result is a large molecule that bears a highly negative charge within the physiologic pH range which therefore attracts positively charged molecules.  Specific saccharide sequences along the heparin chain determine binding sites to other macromolecules for which it has high affinity (such as AT III, thrombin, and lipoprotein lipase).  In the case of antithrombin III a specific pentasaccharide sequence binds consistently to a specific amino acid sequence on the AT III molecule (Gravlee, Davis, & Utley, 1993).

Heparin can be purified from several tissues and from several mammalian species.  Although it derives it’s name from the fact that  it  was originally isolated from liver extracts, intestinal mucosa and lung tissue represent the most common commercial sources.  Mucosal heparin tends to have a lower mean molecular weight, a more cross-linked polysaccharide structure, and a lower cost than lung heparin.  Heparin manufacturers commonly extract mucosal heparin from pigs (porcine mucosal heparin) and lung heparin from cattle (beef lung heparin) (Gravlee, Davis, & Utley, 1993).

Differences in the tissue source influence molecular structure more than differences in the animal source.  Porcine mucosal heparin and bovine lung heparin are both widely used as anticoagulants for CPB.  Both provide effective anticoagulation and thrombosis prevention in experimental models and in adult volunteers (Gravlee, Davis, & Utley, 1993).

Relative to the question of whether or not clinical significance can be related to batch-to-batch variability in heparin potency, it is proposed that interpatient variability accounts for most of the observed variation in the clinical anticoagulation response to heparin.  Because the relationship between mass (milligrams) and potency (units) varies among heparin preparations, the common option is to record heparin doses in units rather than in milligrams (Gravlee, Davis, & Utley, 1993).

Heparin administration for CPB is exclusively intravenous; administered via central venous line, or directly into the right atrium.  The onset of maximal ACT prolongation (measured from the radial artery) occurs within one minute.  Previous work suggested that action peaks 10 to 20 minutes after administration in cardiac surgical patients.  This finding may have represented an artifact from other factors prolonging the ACT (hemodilution and hypothermia).  Current findings support that heparin’s onset is much faster than that and that a rapid redistribution effect probably accounts for a slight reduction in heparin’s anticoagulant effect; occurring 3 to 13 minutes after the peak effect.  It is plausible that heparin’s onset would be slightly delayed in low cardiac output states or with peripheral venous injection (Gravlee, Davis, & Utley, 1993).

Since heparin is  macromolecular and highly polarized one would expect minimal distribution beyond the bloodstream.  Based upon these principles and upon bioassay study of heparin kinetic, heparin’s distribution was long believed to be virtually confined to the plasma compartment of the bloodstream.  Substantial in vitro evidence now points to redistribution of heparin into the endothelial cells although this redistribution appears small in comparison to most other drugs.  Some uptake into extracellular fluid, alveolar macrophages, splenic and hepatic reticuloendothelial cells, and vascular smooth muscle may also occur.  Some or all of these tissues create a relatively small reservoir for heparin that probably contributes to delayed recurrence of heparin-induced anticoagulation (heparin-rebound) after protamine neutralization of the heparin residing in the bloodstream (Gravlee, Davis, & Utley, 1993).

Plasma coagulation, the formation of a platelet plug, and fibrinolysis constitute the three major components of blood clot formation and dissolution.  Heparin’s therapeutic effects derive primarily from the effects on plasma coagulation, but heparin also effects the other two components.  Heparin-induced activation of fibrinolysis has been identified in primate studies (Gravlee, Davis, & Utley, 1993).  It is speculated that release of tissue plasminogen activator may cause this effect, the clinical significance of which is uncertain.  Heparin also has numerous effects on platelets which may occur acutely, and would therefore be applicable in patients undergoing CPB.  Heparin-induced thrombocytopenia has been associated with long-term heparin therapy and CPB.  The profound levels of anticoagulation necessary for CPB can lead to increased surgical bleeding.  Blood salvage techniques (cardiotomy suction, and autotransfusion), can render this less significant.  Excessive postoperative bleeding from non-neutralized heparin or from heparin rebound can occur after CPB.  This condition is usually corrected with additional administration of protamine sulfate (Gravlee, Davis, & Utley, 1993).

Heparin can induce a variety of metabolic and immunologic effects; possibly contributing to the array of abnormalities known to occur in those systems during CPB.  Rare acute reactions attributed to heparin include anaphylaxis, pulmonary edema, and disseminated intravascular coagulation (Gravlee, Davis, & Utley,  1993).  Some of these reactions have been traced to the preservatives chlorocresol and chlorbutol.  Interactions with antibiotics have also been reported (notably with gentamicin and erythromycin), although these appear unlikely to have clinical significance (Gravlee, Davis, & Utley,  1993).