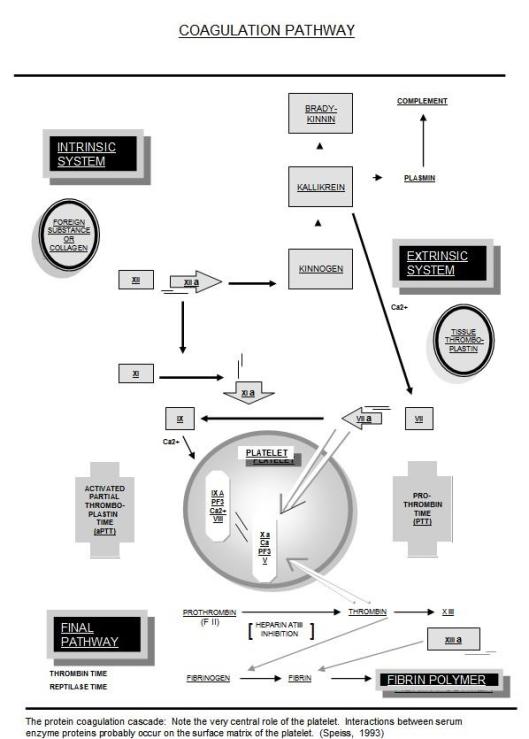 The coagulation cascade is initiated when blood becomes traumatized by exposure to a foreign surface.  An example of this is the initiation of cardiopulmonary bypass.  Blood contact with the polyvinyl chloride tubing utilized in the extracorporeal circuit, the squeezing mechanism of the roller head pump, and various applications of blood filtering devices, all add up to significant trauma to the blood.  This leads to activation of Factor XII (Hageman factor), also known as the “contact” factor.

Activated Factor XII is a proteolytic enzyme that in turn stimulates Factor XI.  This reaction is mediated by HMW kinogen, and is accelerated by prekalikrein.  Platelets are damaged because of adherence to collagen or to a wettable surface, or secondary to damage associated with the extracorporeal circuit.  All events can occur simultaneously (with initiation of CPB)  Platelet disruption mediates the release of platelet phospholipids that contain platelet factor 3 (a lipoprotein which plays a role in subsequent clotting reactions).

Activated Factor XI, Factor VIII, and platelet factor 3, interact together to activate Factor X (the doorway to the common pathway for both intrinsic and extrinsic coagulation mechanisms).  It is noteworthy to point out that an acute deficiency in either Factor VIII (hemophilia), or platelets (thrombocytopenia), will result in a clotting deficit.

Activated Factor X combines with Factor V and platelet or tissue phospholipids to form a complex called prothrombin activator which cleaves prothrombin to form thrombin.  This process (and subsequent processes) are mediated by the presence of calcium ions.  Thrombin facilitates the conversion of fibrinogen to a fibrin monomer which polymerizes into long fibrin threads; thus forming the reticulum of the clot.  Clot is composed of a meshwork of fibrin threads extending in all directions; entrapping blood cells, platelets, and plasma.  The fibrin threads adhere to damaged surfaces of blood vessels (or foreign surface) and prevent further blood loss.

The extrinsic mechanism for coagulation is activated when blood comes into contact with traumatized vascular wall or extra vascular tissues.  Traumatized tissue releases a complex of factors called tissue thromboplastin.  Of particular interest are the phospholipids (derived from tissue membranes) and a lipoprotein complex containing a glycoprotein that functions as a proteolytic enzyme. This lipoprotein complex of tissue thromboplastin interacts with Factor VII and in the presence of tissue phospholipids and calcium ions, converts Factor X to it’s activated form.

The endpoint of activity for both the extrinsic and intrinsic pathways for coagulation is the activation of factor X.  Reactions beyond this point are common to both pathways, and involves the combining of activated factor X with procoagulants (factor II, factor V, calcium ions, and platelet phospholipids) to form a prothrombinase complex.  This complex catalyzes the conversion of circulating prothrombin into thrombin, which in turn converts circulating fibrinogen into insoluble fibrin.  The coagulation process is terminated by the stabilization of fibrin via the activation of factor XIII.

Kallikrein is a plasminogen activator that can stimulate plasminogen to activate plasmin (the effector enzyme of the fibrinolytic system) and initiate fibrinolysis.  Kallikrein also plays the role of an enhancer enzyme for contact activation in the intrinsic coagulation system.  Thus, while kallikrein can be activated by factor XIIa, it is capable of becoming the reciprocal activator of factor XII.  Kallikrein is believed to impact both intrinsic and extrinsic pathways; enhancing procoagulation during CPB.  This is due to the fact that it accelerates the activation of factor VII which is sensitive to hypothermia.  In addition to this hemostatic activity, Kallikrein also activates the kinin and complement system.