“The left shift of the oxyhemoblobin dissociation curve in the presence of significant quantities of HbF indicates that there is a propensity for low delivery of oxygen to tissues.” 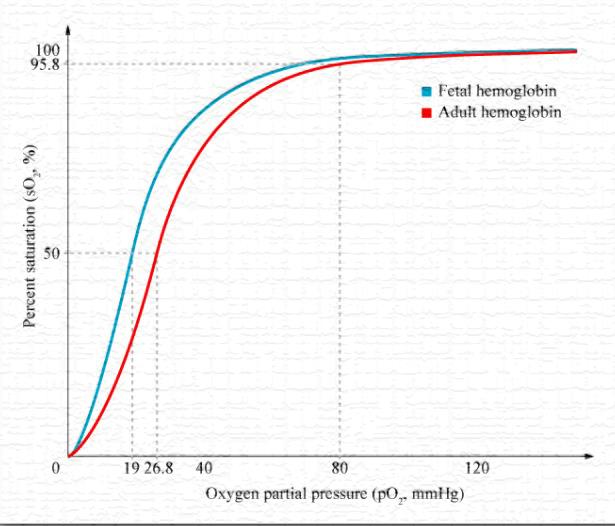 Fetal-hemoglobin (HbF) is an abnormal hemoglobin which is characterized by the presence of 2 alpha and 2 gamma chains in its structural configuration.  HbF comprises approximately 85% of all hemoglobin in a full-term fetus.  HbF exhibits a very high affinity for oxygen which allows the fetus to extract sufficient oxygen from the maternal circulation regardless of the relatively low PO2 in the placenta blood.  This is a desirable physiological feature.

It is believed that the gamma chains within the HbF are responsible for the physical-chemical relationships which express themselves through increased oxygen affinity.  The increased O2 affinity associated with HbF thus shifts the oxyhemoblobin dissociation curve to the left, thereby reducing the P50.  During the first year of life, HbF gradually disappears from its high concentration at birth and is replaced with HbA (adult).  If a high concentration is found in a patient after the first year of life, it is indicative of a pathologic hemoglobin condition .  Hemoglobin F is increased to a variable extent in thalassemia, sickle cell anemia, and other genetic disorders.

In sickle cell disease, the HbF is of benefit due to its resistance to the sickling process.  It has been shown that in some sickle cell disorders, there may be as high as 15-35% of the patient’s total hemoglobin represented by HbF.  HbF resists polymerization thus providing a degree of resistance to the HbS patients.  The combined disorder of HbS and HbF usually exhibit a marked reduction in the clinical severity of their sickling disorder that would otherwise be seen with low oxygen tensions.

The left shift of the oxyhemoblobin dissociation curve in the presence of significant quantities of HbF indicates that there is a propensity for low delivery of oxygen to tissues.  The inability of hemoglobin to release oxygen in this condition means that tissue oxygen tensions must become very low before oxygen is liberated from the hemoglobin and delivered to the tissue.

The perfusionist should be aware of the potential for reduced oxygen delivery and manage the status of the cardiopulmonary bypass run to accommodate poor oxygenation.  This may require higher flow rates, etc..  Additional consideration should be given to the following:   HbF is more easily oxidized to methemoglobin than hemoglobin A.  Methemoglobin is incapable of combining reversibly with oxygen.