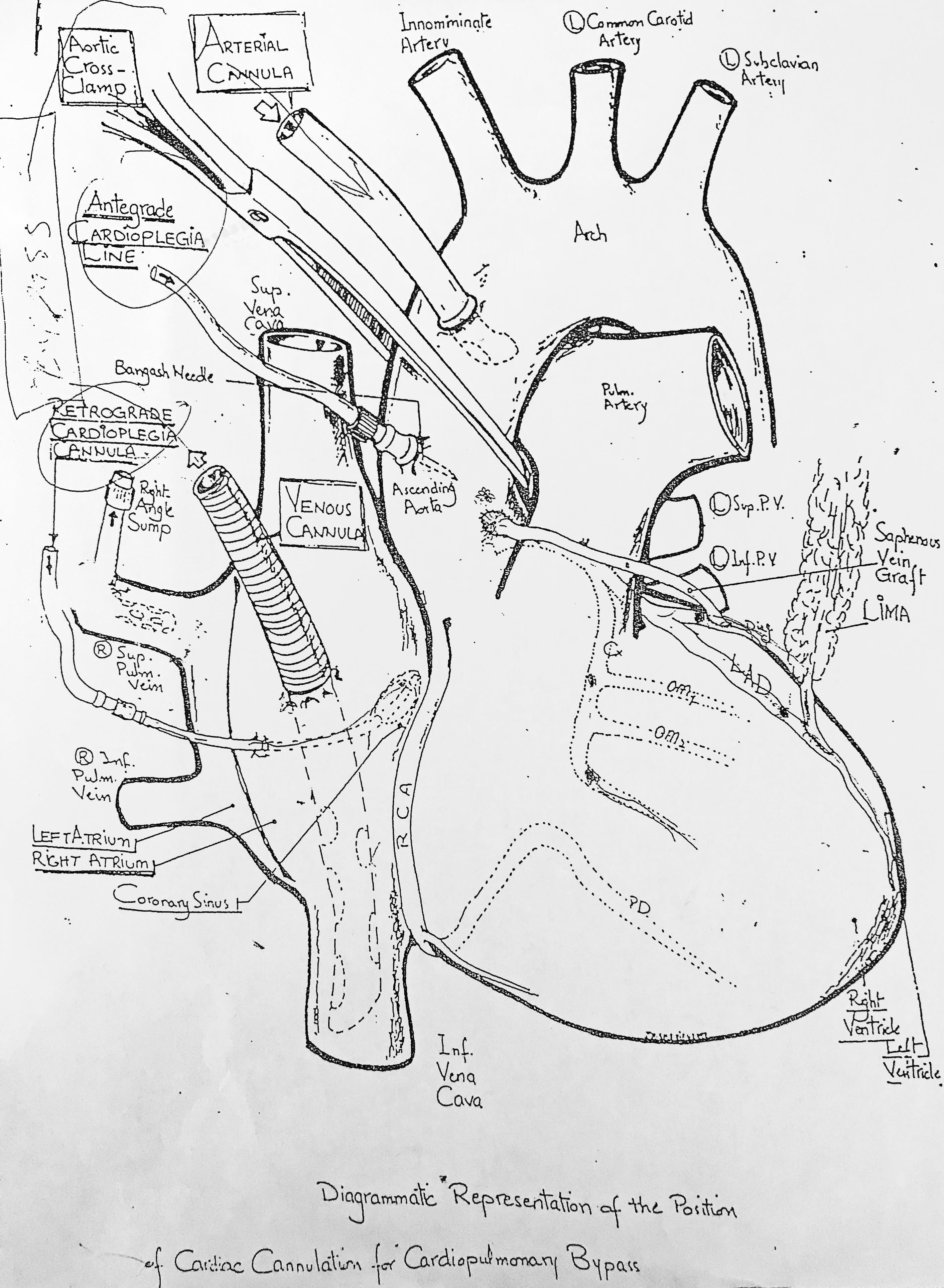 This article can be found on Perfusion.com as well as the PDC FaceBook Group.

Bryan Lich, CCP is the owner and Co-Editor of Circuit Surfers.  He also manages a very informative FB page dedicated to disseminating Perfusion communication throughout the world.  This article is duplicated and forwarded here in an effort to maximize exposure and dissemination to the widest perfusion base possible. 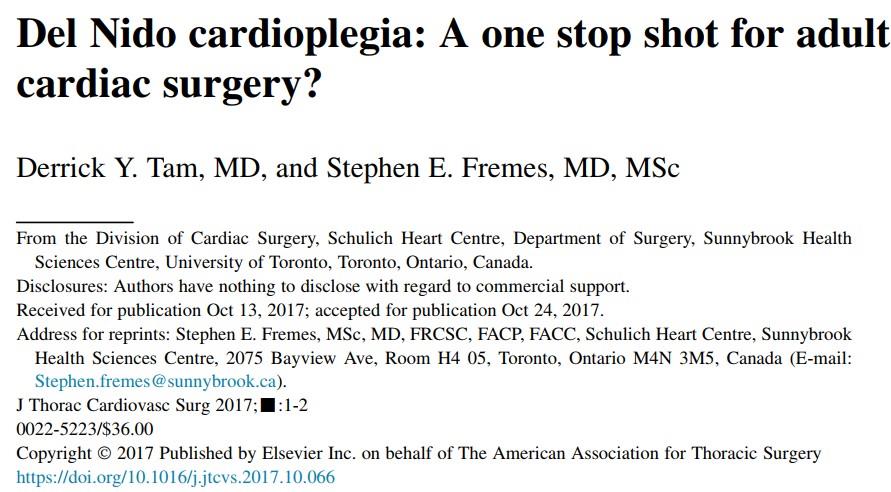 Courtesy Of the Above Cited Article 🙂

Although it was initially developed for congenital heart surgery, del Nido cardioplegia (DN) has recently gained widespread attention in adult cardiac surgery.1 Its purported benefit in pediatric surgery include its long duration of action with a single dose and its potential for improved myocardial protection through reduced energy consumption and scavenging of inflammatory substrates. These potential benefits have led DN to be evaluated further in adult cardiac surgery. Multiple studies have examined DN in various settings in adult cardiac surgical populations, from complex valve surgery to coronary artery bypass grafting for acute coronary syndrome.2-7

All these studies, however, have been observational and retrospective in nature. In this issue of the Journal, Ad and colleagues8 present their findings from a randomized clinical trial examining the efficacy and safety of DN versus whole blood cardioplegia in patients undergoing nonemergency isolated coronary artery bypass grafting (CABG), isolated valve surgery, and combined valve and CABG surgery. Patients were block randomized such that both baseline characteristics and procedural type were well balanced between the arms. In this study, the primary outcome was myocardial preservation, as assessed through 4 means: return to spontaneous rhythm, defibrillation requirement, inotropic support, and serial troponin values. Important secondary outcomes included mortality and morbidity, as defined by the Society of Thoracic Surgeons National Database.

Although it was initially designed as a noninferiority trial with a planned analysis of 250 patients per group, the study was stopped very early after an interim analysis showed superiority in one of the primary outcomes in the DN group. The trial enrolled a total of 89 patients between the arms. Given that an interim analysis took place and that there were four primary outcomes, a new P value for superiority was calculated (P < .001). As none of the 4 primary outcome variables approached the new statistical threshold, we can only conclude from this trial that DN is noninferior and not superior to blood cardioplegia. Interestingly, there was no difference in cardiopulmonary bypass time (97 vs 103 minutes; P ¼ .288), although aortic crossclamp time was reduced (70 vs 83 minutes; P ¼ .018) with DN relative to whole blood cardioplegia. These findings are relevant, because both cardiopulmonary bypass time and aortic crossclamp time have shown to be independent risk factors for postoperative death.9,10

Nonetheless, findings from this study must be interpreted in the context of some limitations. The surgical team was unblinded, and there was no standardization for the use of inotropic support; this represents a potential source of bias. Furthermore, the clinical significance of the surrogate outcomes used in this study, such as the return of spontaneous rhythm or the need for defibrillation, remains unclear. Troponin values continued to rise in the control group, such that a peak could not be demonstrated. That said, the prognostic significance of small rises in postoperative troponin levels after cardiac surgery in the absence of electrocardiographic and echocardiographic findings is uncertain and controversial.11

The study findings are only generalizable to patients in stable condition who required either isolated CABG, isolated single valve, or single valve and CABG. The investigators specifically excluded high-risk patients, including those requiring preoperative inotropic support and preoperative mechanical circulatory support. Most of the cases were elective; the safety of single-shot cardioplegia for CABG after acute coronary syndrome could be affected by the compromised coronary circulation. In a propensity matched study of 40 patient pairs undergoing high-risk CABG after an acute myocardial infarction, no differences in early mortality, inotropy requirement, or intra-aortic balloon pump requirement were noted.6

Furthermore, the results reported by Ad and colleagues8 were derived from a single center of excellence, with an institution-specific protocol used for the delivery and composition of both conventional and DN cardioplegia that may be different from that in other centers. The most important point to stress is that this trial was initially designed to assess noninferiority between DN and whole blood cardioplegia but was stopped early because of the benefits seen in the DN group.

The decision to end clinical trials prematurely is difficult and remains controversial.12-14 Patient protection is paramount in trials, and studies are stopped prematurely, in general, for excess harm rather than benefit. Still, a meta-analysis and metaregression of early truncated clinical trials suggest that these trials often overestimate the true effect size relative to nontruncated studies.15 In this case, Ad and colleagues8 justified the early termination of this trial, because one of their primary outcomes, spontaneous return of rhythm, was found to be not only noninferior but superior at the interim analysis. Other important outcomes, however, such as inotropic requirements, cardiopulmonary bypass time, crossclamp time, and the composite of Society of Thoracic Surgeons–defined complications trended lower in the DN group but were not statistically significantly different at the revised a threshold for superiority. The continuation of the trial to a higher recruitment level might have provided the power necessary to detect important differences on clinically relevant outcomes. Also, a larger sample size might have allowed for some subgroup analyses.

Overall, this article reaffirms and highlights the challenge in designing and completing adequately powered studies in cardiac surgery for clinically relevant outcomes that reflect myocardial protection. Recent large clinical trials in cardiac surgery that examined the rate of perioperative myocardial infarction or low cardiac output syndrome have enrolled totals of 800 to 4000 patients.16-18 Again, Ad and colleagues8 are to be commended for conducting a relevant study and shedding light on this important topic critical to performing safe cardiac surgery.

DN may be particularly advantageous in mitral valve operations because the valvular correction does not need to be interrupted by frequent readministration of cardioplegia, thereby improving surgical workflow. Although multiple strategies of protection are sufficient for most cardiac operations, there remains an unmet need for a simple approach that can reliably preserve the myocardium for very lengthy, complex procedures. The findings from this randomized, controlled trial8 confirm those of a recently published meta-analysis of observational studies; the aortic crossclamp time was lower with DN, and there were no differences in mortality, cardiac enzyme release, or the need for inotropic support.19 Nonetheless, there remains a need for further investigation in the form of a much larger multicenter clinical trial to prove the generalizability of these results. Although DN may not be the one-stop shot for all adult cardiac surgery, it has certainty proved its benefit for coronary artery bypass grafting and single-valve surgery in this small randomized, controlled trial.

outcomes in adult cardiac surgery in the use of del Nido cardioplegia solution.

bypass duration is an independent predictor of morbidity and mortality

changes: relationship with mortality and validation of the universal definition

on meta-analyses involving trials stopped early for benefit: is there a problem

protection in adult cardiac surgery: a systematic review and meta-analysis.