There are so many theories and approaches associated with DHCA- and they lie beyond the scope of this post- however I was having an interesting discussion with a colleague of mine who as of late has employed nitroglycerine as a vaso-dilatory strategy effecting very rapid cooling for patients requiring cerebral protection ASAP- as well as global cooling at the microvascular level. 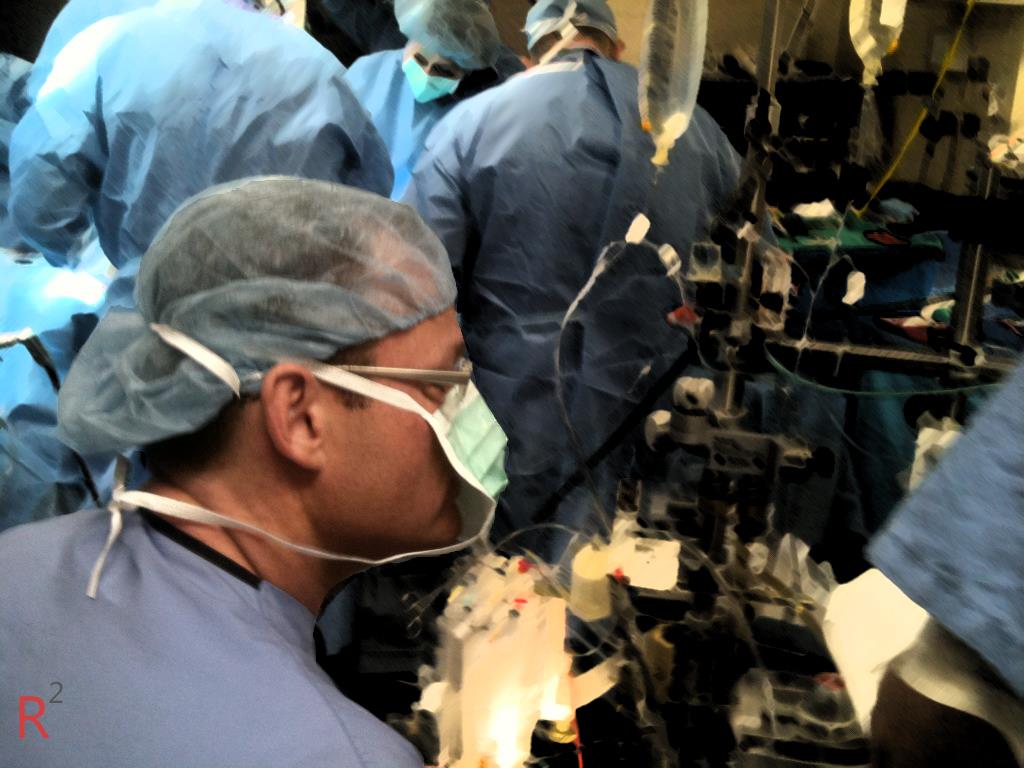 It made sense to me, as long as mean arterial pressure drops don’t represent a caveat to adequate tissue perfusion, but the point that was intriguing, was the speed @ which he was able to achieve sub-20 degree (Celsius) global temperatures for a run of 4 patients, all of which recovered absent any discernible neurological deficit.

So my question to you is this:  Have you employed this technique- or would you consider it?  What is your opinion regarding the theory?

Please offer any opinions or suggestions in the comments section? 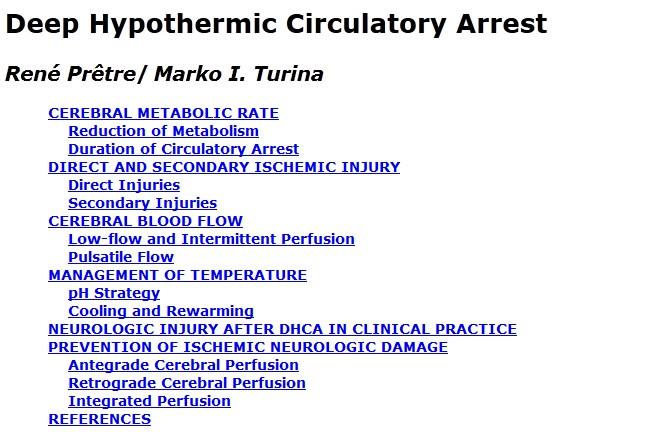 What Happens When the Brain Cools Down ? 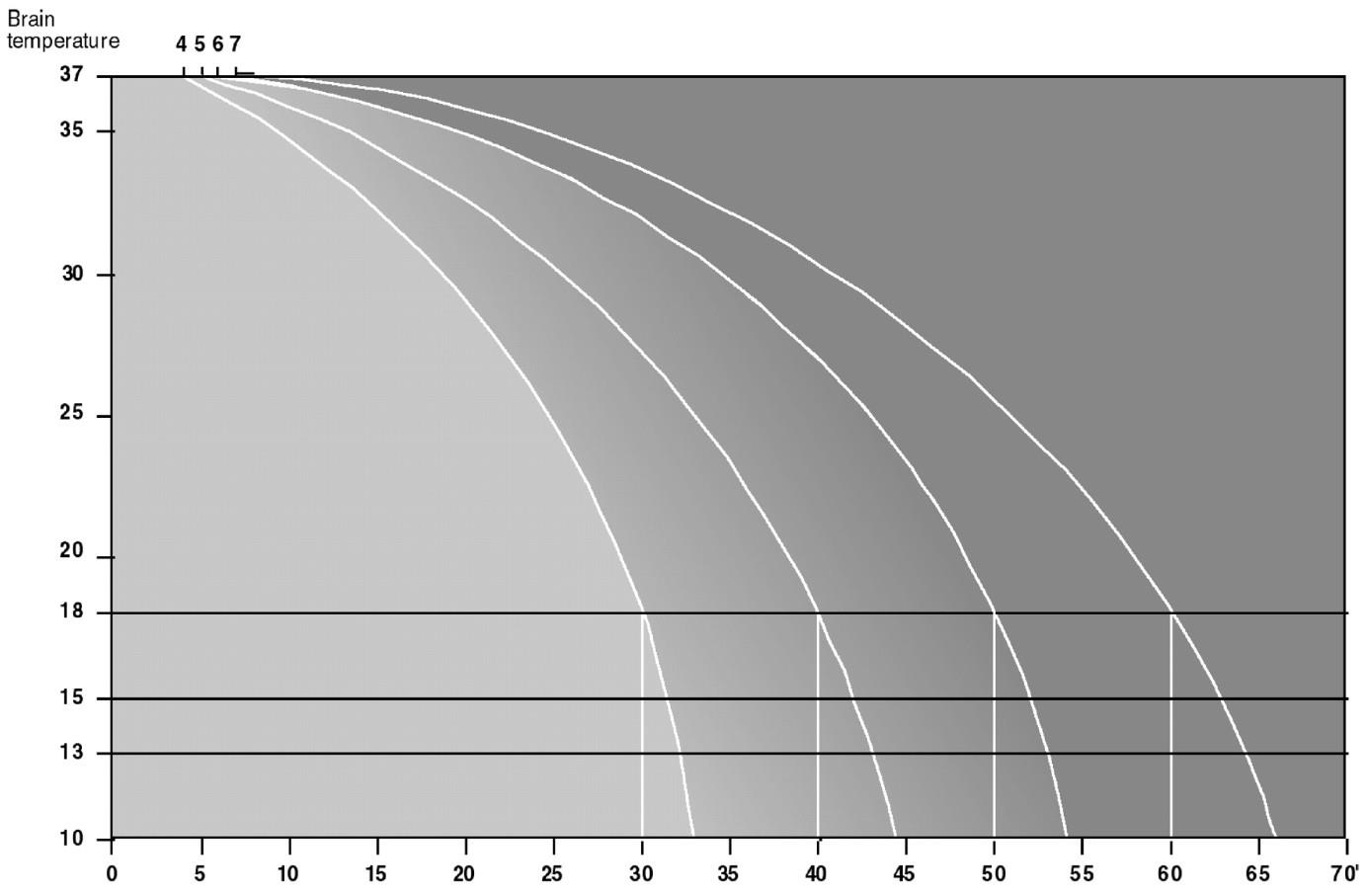 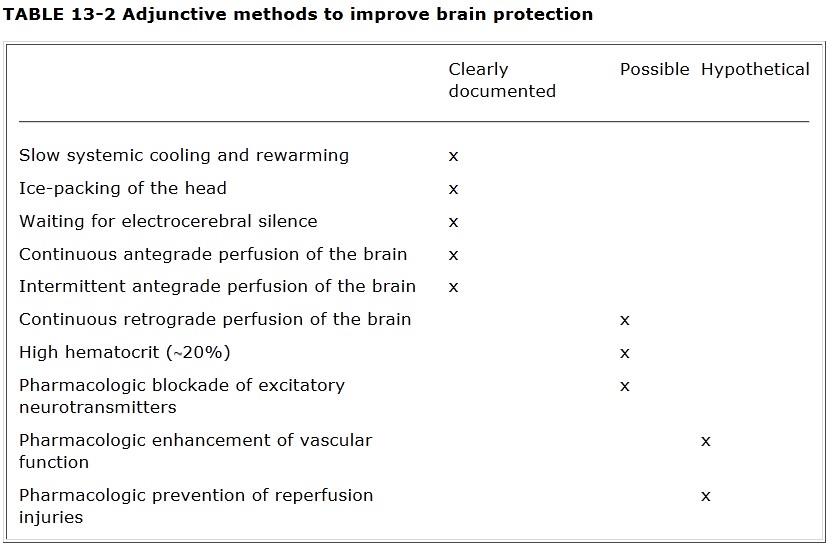 preserves autoregulation of brain perfusion and optimizes cellular enzyme activity. Because of blood alkalemia,the curve of oxyhemoglobin dissociation is shifted toward the right, corresponding to an increased affinity of oxygen for hemoglobin.

With the further shift of oxyhemoglobin to the right due to hypothermia, the availability of oxygen carried by the hemoglobin molecule becomes tremendously reduced.

At deep temperature reductions, oxygen diluted in blood represents the major source of oxygen to tissues.

results in a powerful and sustained dilatation of the cerebral vessels because of the high level of carbon dioxide.  Autoregulation of brain perfusion is lost and cerebral blood flow greatly increased.

The time for temperature equilibration between blood and brain is shortened, resulting in a quick and homogenous cooling of the brain.

Hypercapnia shifts the oxyhemoglobin-dissociation curve toward the left and results in an increased availability of oxygen to tissues.

Is there a Need for Speed ?

Oxygen availability is reduced during hypothermia because of the shift to the right of the oxyhemoglobin curve. The parallel decrease in metabolic rate is likely to preserve an appropriate balance between availability and requirement of oxygen.

During rapid cooling, however, the affinity of oxygen to hemoglobin rises sharply during the period that the tissue temperature is not equilibrated with that of blood.

This effect, combined with the dilution of blood by the priming volume of cardiopulmonary bypass, may temporarily create a state of insufficient oxygen availability.

Studies in animals confirm that expedited cooling associated with excessive hemodilution resulted in an uncompensated consumption of energetic molecules and in the development o fcellular acidosis before institution of circulatory arrest.

In one study, it was demonstrated that an increased concentration of hemoglobin was able to compensate for the decreased oxygen availability related to hypothermia.

Using  microscopy, these investigators further established that the cerebral capillary flow was maintained despite increased blood viscosity (which is associated with high hematocrit values).41,42

These findings support the consensus that cooling should be performed slowly and with an adequate hematocrit.

Rewarming & Bringing Them Back

Probably the safest approach to a patient requiring a long period of circulatory arrest resides in the integration of complementary methods of perfusion and monitoring.50

Retrograde perfusion of the aorta through the femoral artery should be avoided in the presence of a thoracic aortic aneurysm in order to reduce the risk of particulate dislodgment with embolization in the brain and myocardium.

Antegrade perfusion of the aorta is performed with cannulation of the ascending aorta or right subclavianartery. The body is cooled to 18°C.

Circulatory arrest is established only after electro-cerebral silence is obtained and jugular venous saturation is superior to 95%.

During the 10 to 20 minutes preceding circulatory arrest, the temperature of the perfusate can be lowered to 13°C to further reduce brain temperature and metabolism.

The arch arteries are connected to a graft (either with the use of a patch of aortic wall or separately), and antegrade perfusion of the brain is resumed before more extensive resection and repair of the aorta is performed.

When the risk of particle embolization to the brain is substantial (old age, severe atherosclerosis of the aorta, arch aneurysm with thrombotic material), a short period of retrograde cerebral perfusion can be performed to wash out the arch arteries before antegrade perfusion is definitively reestablished.50