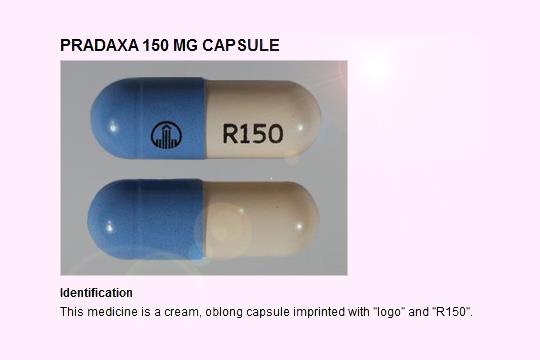 It should be noted up front that while Dabigatran is indicated as an anticoagulation Rx for atrial fibrillation, it is not recommended for patient’s with concomitant valvular disease, and not indicated for anticoagulation therapy in patient’s receiving valve replacements or experiencing valve dysfunction.

Dabigatran and its acyl glucuronides are competitive, direct thrombin inhibitors. Because thrombin (serine protease) enables the conversion of fibrinogen into fibrin during the coagulation cascade, its inhibition prevents the development of a thrombus. Both free and clot-bound thrombin, and thrombin-induced platelet aggregation are inhibited by the active moieties.

The INR test is relatively insensitive to the activity of dabigatran and may or may not be elevated in patients on Pradaxa. When converting a patient from Pradaxa to warfarin therapy, the INR is unlikely to be useful until at least 2 days after discontinuation of Pradaxa.

Administration of Pradaxa in patients with moderate hepatic impairment (Child-Pugh B) showed a large inter-subject variability, but no evidence of a consistent change in exposure or pharmacodynamics. 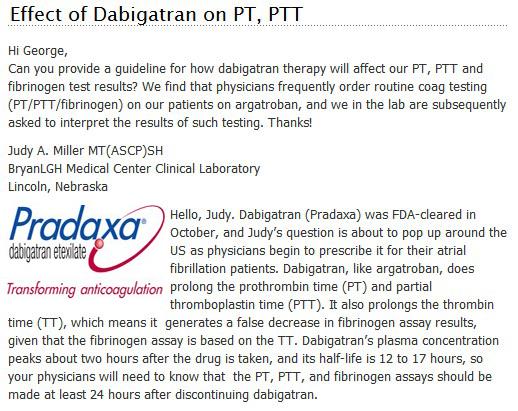 Q & A with Dr Michael Ezekowitz

Dabigatran becomes therapeutic within 30 minutes to two hours of oral administration, so it is pretty immediate.

Are there any drug-drug interactions or contraindications that you want to highlight?

The only drug that is contraindicated is rifampicin, because it induces the p-glycoprotein enzyme and actually increases the removal of the drug by the gut from the blood via a complicated mechanism. But in all other respects, there are no other significant drug-drug interactions, and there are no warnings in the FDA label.

How long do you need to wait after stopping dabigatran before surgery can be performed?

Any specific recommendations for patients who have received a drug-eluting stent and are already taking both aspirin and clopidogrel?

About 8% of the patients who were in the RE-LY trial were being treated with clopidogrel; the use of clopidogrel at study entry was not a contraindication. As far as triple therapy is concerned, we don’t have data yet from the RE-LY trial on patients who were on triple therapy over the course of the trial; however, for the study as a whole, there was a bleeding advantage in favor of dabigatran over warfarin, particularly when it came to intracranial hemorrhages, so I doubt very much that dabigatran would be a disadvantage, compared with warfarin, for triple therapy. But this is a question that really needs to be definitively addressed at some point.

Do you have any insights into who could or should be switched off warfarin to this drug and any patients who shouldn’t?