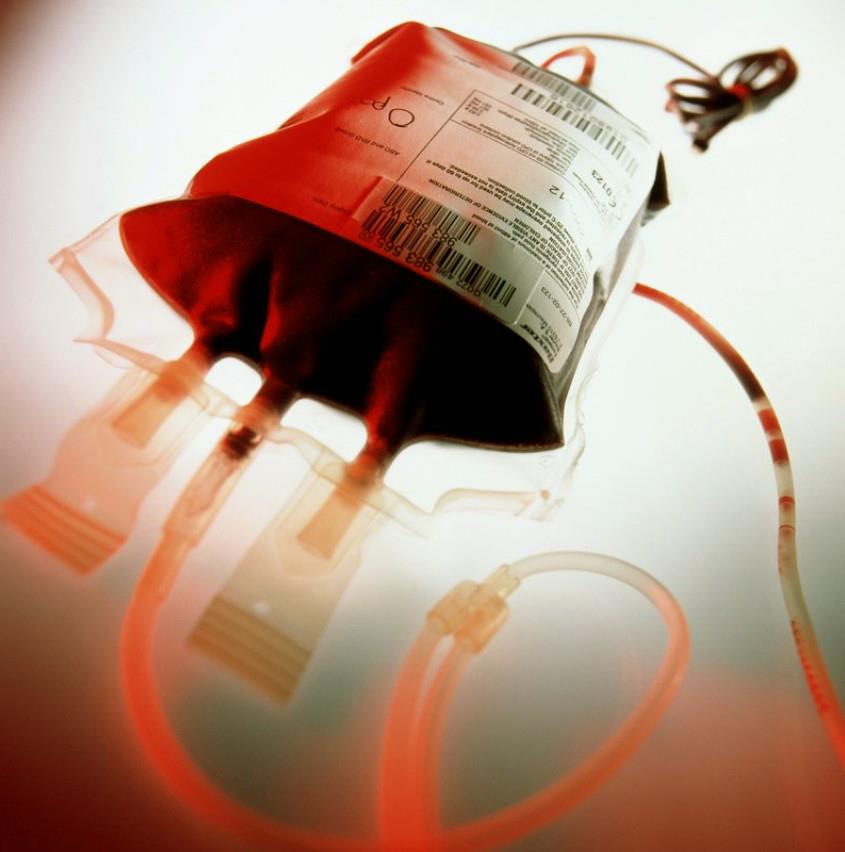 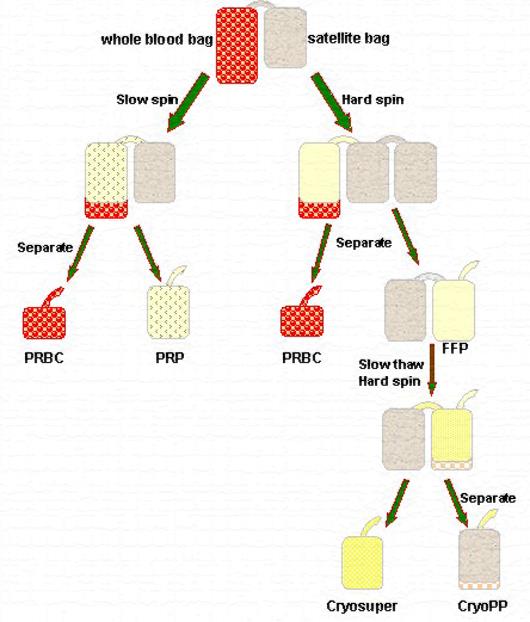 Fibrinogen is a high molecular weight protein occurring in the plasma in quantities of 100 to 700 mg/dl.  In the presence of calcium ions it becomes the precursor for fibrin threads the foundation of the blood clot.  In terms of replacement therapy, a target value of 150 mg/dl may be achieved by administering blood products such as cryoprecipitate or fresh frozen plasma.

Fibrinogen replacement: Effect can be monitored by fibrinogen
level assay and clinical response.

Pediatric dosing for cyroprecipitate is 1 unit per 10kg child,
which should increase fibrinogen by 60 – 100 mg/dL.

Fibrin glue:Although single units of cryoprecipitate are available for use in the preparation of fibrin glue to be applied locally for surgery, commercially available, virally inactivated concentrates have a higher fibrinogen concentration and are preferred for this purpose (Tisseel®). A patient may donate autologous plasma for processing into cryoprecipitate prior to a planned surgical procedure. 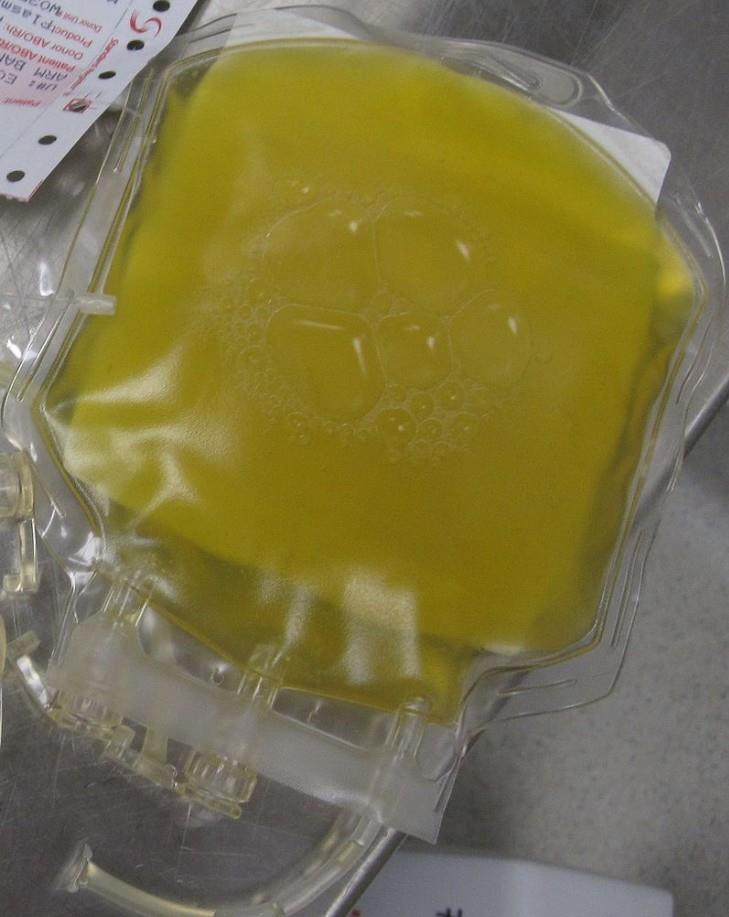 Fresh Frozen Plasma (FFP) contains the same concentration of all plasma proteins as are present in the donor’s plasma.  Fibrinogen and all other factors therefore are not concentrated.  When some deficiency of a factor is present, a considerable amount of FFP is required to raise levels back to normal.  Fibrinogen has been accepted as the protein most critical in the coagulation cascade.

Considering the fact that each unit of FFP is approximately 250 ml, and that the patient’s circulating blood volume averages 5000 ml or greater, the use of several units of FFP will most often be diluted in the patient’s own plasma, and have little effect in raising overall plasma fibrinogen concentrations.

Platelets are small ovoid discs 2-4 micrometers in length.  They are formed by the fragmentation of large hemopoietic megakaryocytes found in the bone marrow.  The normal platelet concentration in blood is 150,000 to 300,000 platelets per microliter.  Although platelets are non-nucleated and unable to reproduce, they possess many of the same functional characteristics of whole cells.  In the platelet cytoplasm are active factors such as actin and myosin molecules as well as thrombosthenin which facilitate platelet contraction.  Platelets possess residual golgi apparatus, mitochondria, and endoplasmic reticulum for the storage of calcium ions, enzyme synthesis, ATP and ADP synthesis.  Also present is fibrin stabilizing factor which performs an active role in the clotting mechanism.  Also present is a growth factor that allows vascular endothelial cells, vascular smooth muscle cells, and fibroblasts to proliferate; thus facilitating the repair of damaged vascular walls.

Platelets possess a half life of 8-12 days, at which time they are eliminated from the circulation by the tissue macrophage system.  The majority of this elimination occurs in the trabeculae of the spleen.  Platelets change their characteristics drastically as they come into contact with damaged vascular surfaces (collagen fibers in the vascular wall or damaged endothelial cells).  This process consists of the platelets swelling, assuming irregular shapes, and developing irradiating processes jutting from their surfaces.  They become sticky in order to adhere to collagen fibers.  Contractile proteins forcefully promote the release of granules containing multiple active factors. Thromboxane A2 and large quantities of ADP are released and secreted into the blood.  The released ADP and thromboxane stimulate nearby platelets to activate as well, and compounded with the stickiness of these additional platelets causes them to adhere to the originally activated platelets.  As a result of tear or damage to a vessel, the vascular wall or extravascular tissues elicit a vicious cycle of activation of successively increasing numbers of platelets that themselves attract more and more additional platelets, leading to formation of a platelet plug.

Platelet rich plasma (PRP) contains approximately 1-2 X 1012 platelets per liter, and is distributed in 50 ml units.  Each unit represents a single donor, and several units may be pooled from a single donor using platelet pheresis technique.  Once harvested, platelets are anticoagulated using a citrate solution and are maintained at room temperature on an oscillating agitator.  They are usually stored for up to five days, with the incidence of septic transfusion rising significantly if stored for periods longer than five days.

Stored platelets undergo several morphological and biochemical changes that lead to a decrease in their activity.  It is unclear what percentage of platelets react normally from any given transfusion in light of a number of problems.  Surface glycoproteins change as though they were partially activated.  ADP and other energy stores are altered.  The clinical expectation is 25% or more of platelets will be inactive and a percentage of the remainder will require time to recover normal function after transfusion.  Patients that are septic, acidotic, or have splenomegaly, may see a further decrease in the number of functioning platelets after transfusion. 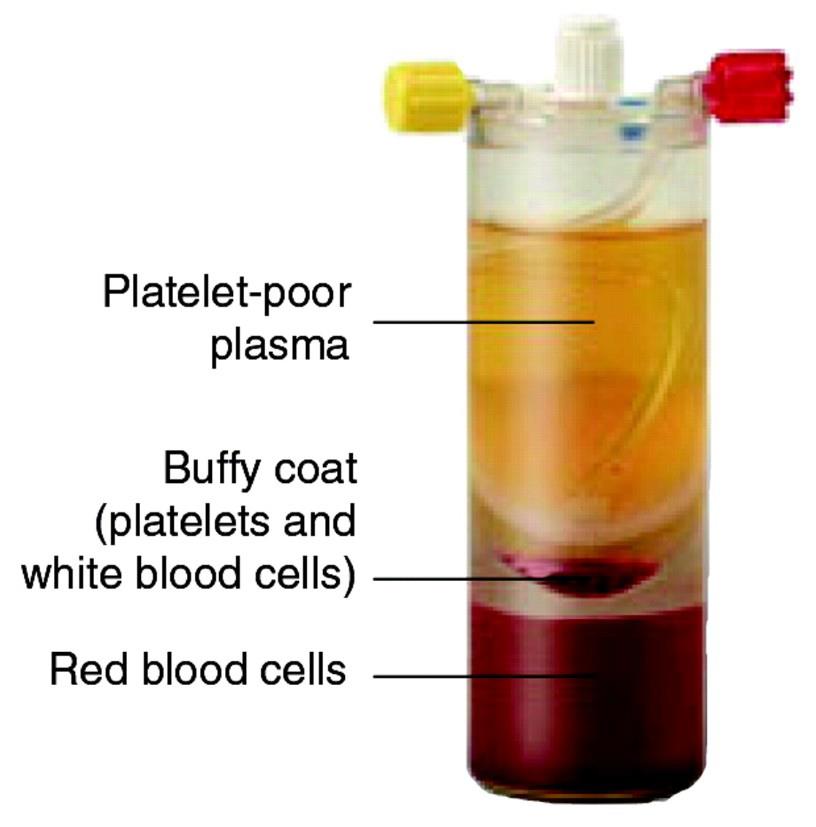 The number of units required to replace a platelet deficit can be calculated assuming that 1 unit will increase the platelet count of a 70 kg, normovolemic patient by approximately 5-10,000/ml.  The most common “rough” estimates are based on 1 unit of platelets per 10 kg of patient weight.