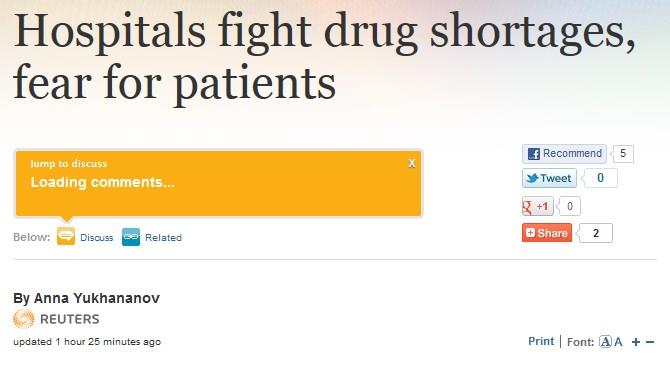 A List of articles on Perfusion related Med Shortages Below:

WASHINGTON — At the Henry Ford Hospital in Detroit, pharmacists are using old-fashioned paper spreadsheets to track their stock of drugs in short supply – a task that takes several hours each day.

Most of the hospital’s medicines – an estimated $100-million supply a year – are tracked by automated systems that allow for quick reorders when the supply runs low. But these automated systems, designed to help the hospital avoid purchases and storage costs of unused pills and vials, do not work if it is uncertain when the next batch of drugs will come in.

A few hundred medicines make the list of drugs in short supply: anesthetics, drugs for nausea and nutrition, infection treatments and diarrhea pills. A separate list has scarce cancer drugs for leukemia or breast cancer.

“Now we have to go through the pharmacy and count those drugs on a daily basis … to make sure we don’t run out,” said Ed Szandzik, director of pharmacy services at the hospital for over a decade.

The growing scarcity of sterile, injectable drugs is one of the biggest issues confronting hospitals across the country, and will be a key issue at the annual American Society of Clinical Oncology meeting in Chicago this weekend.

Health officials blame the shortages on industry consolidation that has left only a handful of generic manufacturers of these drugs, even as the number of drugs going off-patent is growing. Some drugmakers have been plagued by manufacturing problems that have shut down multiple plants or production lines, while others have stopped producing a treatment when profit margins erode too far.

Some medicines have been periodically short in the past, doctors and pharmacists say, but the number of drug shortages has escalated in recent years, jumping from 56 in 2006 to 250 last year, according to U.S. Food and Drug Administration figures.

But in the meantime, pharmacies around the country are counting pills, begging neighboring hospitals for extra supplies and scouring the Internet for news of additional supply disruptions.

When rumors surface of an impending shortage, some pharmacies rush to buy up more than they need, likely leading to bigger shortages, analysts and other pharmacists said.

All of this requires regular attention from hospitals to manage the crisis. At Children’s National Medical Center in Washington, D.C., pharmacists and administrators meet weekly to discuss just how dire the situation is for different medicines.

“Every Wednesday before we have that (meeting), I have a bit of anxiety,” said Ursula Tachie-Menson, acting chief of the hospital’s pharmacy division. She spends about 30 percent of her time each week addressing shortage-related problems.

“Out of all the (21) years I have been practicing, these drug shortages have been one of the biggest challenges,” she said.

Early warning system
The FDA has been acting under an October executive order from President Barack Obama to fill in the gaps. It has had success getting an early warning from drug companies when they foresee a new shortage, allowing the agency to persuade other manufacturers to increase their production or look overseas to guarantee supply.

“I can tell you that there’s not a single company I’m aware of out there that isn’t talking to the FDA,” said David Gaugh, head of regulatory sciences at the Generic Pharmaceutical Association, referring to the trade group’s members.

The FDA said early notification has helped prevent 128 shortages in six months. It also estimates the rate of new shortages is slowing, with half the number of new scarce drugs this year compared to last.

But surveys and anecdotes continue to pile up, showing doctors’ efforts to find scarce drugs have not gotten easier. This month, a website for U.S. oncologists, MDLinx, surveyed 200 doctors and found more than 90 percent of them have experienced shortages of key cancer drugs.